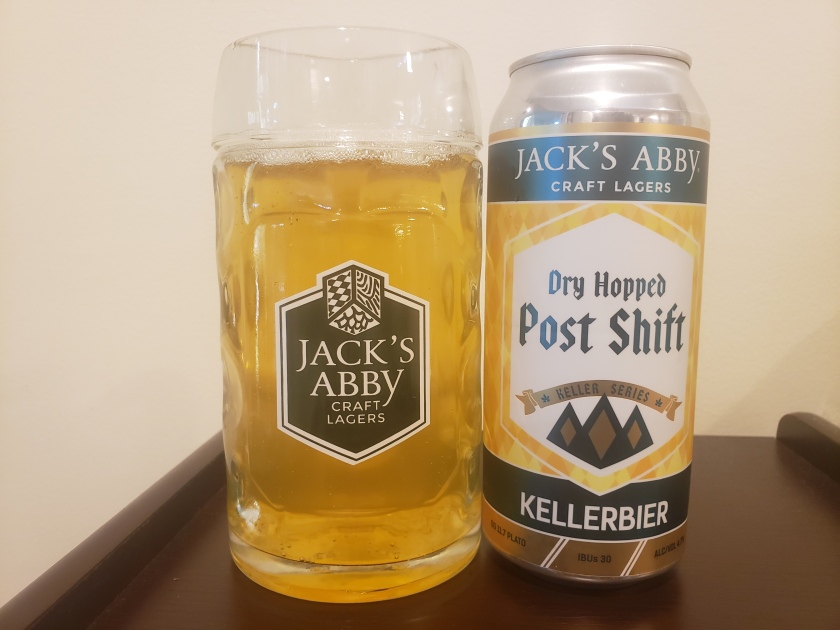 Every brewery that has a taproom should be constantly sharing their in progress and experimental recipes with their customers as a way to get feedback and optimize the recipes ahead of a widespread release. One of the most fun things about visiting taprooms is trying a variety of beers, including beers that aren’t available outside of the taproom. It can also be frustrating, especially when you try a beer that is amazing and you can’t bring more home. A great example is the dry hopped version of Jack’s Abby’s exceptional Post Shift Pilsner. I tried it at the brewery and was blown away, I loved the mixture of aromatic hops in the clean and crisp lager. Needless to say, I was thrilled when Jack’s Abby made the recent announcement that Dry Hopped Post Shift was going to become a regular part of their Kellerbier series, canned and into distribution. I was so excited I immediately planned a curbside-pickup trip to the brewery and grabbed a couple 4-packs. Jack’s Abby Dry Hopped Post Shift is dry-hopped with Hallertau Blanc hops and is available on a rotating basis on draft and in 16 oz. cans.

Jack’s Abby Dry Hopped Post Shift pours slightly hazy light yellow with a solid white head. The aroma features some fruity and floral hops. This is a balanced, easy-drinking, light and sessionable (4.7% ABV) hoppy pilsner. The hops lead the flavor, notes of cut grass, melon and lemon. This is complemented by a pale malt backbone, hints of bread crust and cereal. Dry Hopped Post Shift finishes crisp and clean with just a touch of lingering hop flavor. This is an excellent beer, I loved it at the beer hall and I am so glad it is now a regular release. I will crush many of these this summer. Hoppy Boston score: 4.75/5.