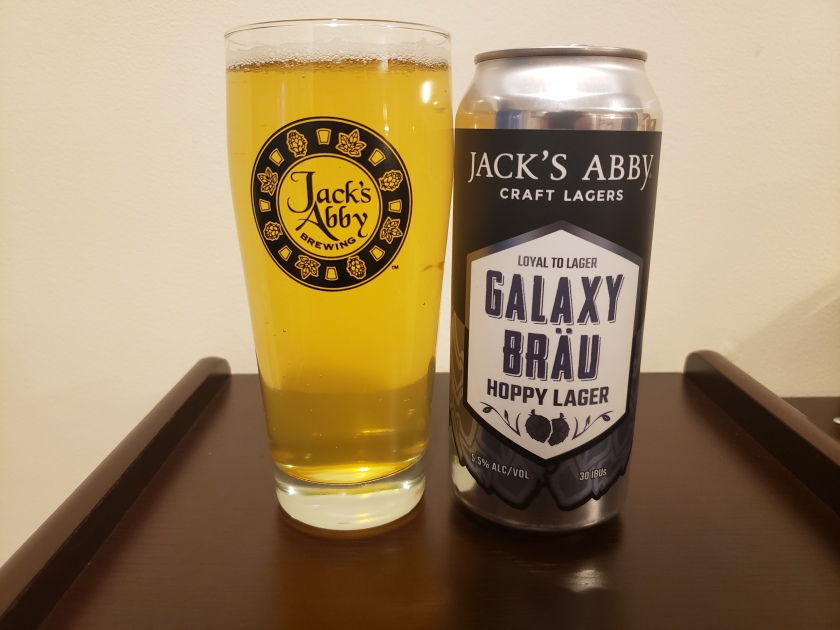 When you hear the names of popular New World hop varieties like Galaxy, Citra, Mosaic, and Nelson Sauvin it immediately brings to mind hop-bomb, hazy bodied New England style IPAs, the beer substyle that these hops are most associated with. Breweries like Jack’s Abby are trying to show that the intense citrus and tropical fruit flavors and aromas these hops impart can be used in a wider variety of beers. Jack’s Abby has been using these hop varieties in hop-forward lagers like Mass Rising, Excess IPL and Kiwi Rising for years, but it is clear that they are making an active effort to showcase individual hop styles (and the built-in marketing opportunities these popular hops come with) in their newer lines of hoppy lager beers. Excess IPL is now a single-hopped beer, with a rotating hop variety. New this year is another series of dry-hopped lagers that each showcase a particular hop variety, but in a clean, crisp and clear lager instead of a hazy ale. The series will include Galaxy Brau, Citra Brau, Mosaic Brau and Nelson Brau (and possibly others in the future). I recently grabbed some Galaxy Brau, which is available now on draft and in 16 oz cans. 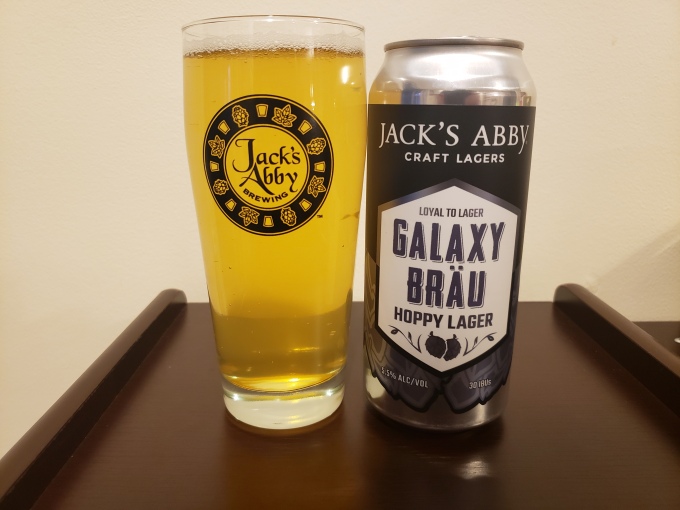 Jack’s Abby Galaxy Brau pours clear light yellow with a solid white head. The aroma is solidly hoppy, heavy on the tropical fruit. The flavor is also hop forward, notes of peach, mango, and orange along with some floral undertones and crisp bitterness. This is balanced by a mild malt backbone, hints of crackers and bread crust. Galaxy Brau is light and easy-drinking, not too boozy at 5.5% ABV. The finish is crisp and clean with a little lingering hop flavor. This is a really nice beer, it’s not a fruit-smoothie NEIPA, but the hops still really sing. If you like a lager with plenty of hop flavor that is also clean, drinkable, and won’t fatigue your palate this is a great choice. I know that this series will be a regular addition to my beer fridge. Hoppy Boston score: 4.5/5.