Malted rye has been used as an ingredient in beer for centuries, although it fell out of favor as a fermentable due to purity laws restricting the ingredients used in the brewing process in many countries. Recently there has been a renewed interest in brewing with rye malts, mostly due to innovative American craft brewers. While rye has been incorporated into a number of beer styles, the most popular is the rye IPA. I am a huge fan of this style. When designed correctly the spicy character of the rye beautifully melds with the bitter and fragrant hops resulting in a complex and delicious beer. Jack’s Abby Brewing of Framingham, MA took this concept in a slightly different direction with their Session Rye IPL (India Pale Lager). This beer uses rye malts along with Centennial, Chinook, Columbus and Crystal hops, but ferments at lower temperatures with lager yeast. Ideally the lower fermentation temperature results in a crisp lager that lets the spicy rye and aromatic hops shine. 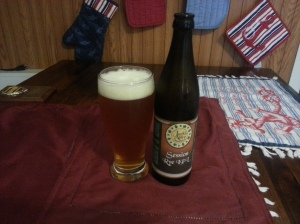 Jack’s Abby Session Rye IPL pours a deep orange/brown, hazy with a moderate white head. The smell is a nice burst of American hops, aromas of the woods mingle with citrus fruit. The beer is very light and easy to drink. The hops are significant in the flavor, lemon, pine, and orange with a touch of mango and grapefruit. There is enough malt to add some mild flavors, highlighted by a touch of spicy rye. The finish is very clean with just a hint of bitterness. At 3.8% ABV it is definitely a session beer, light and easy to drink. This is a great summer beer that is well balanced and drinkable, but full of flavor. Hoppy Boston score: 4.5/5.