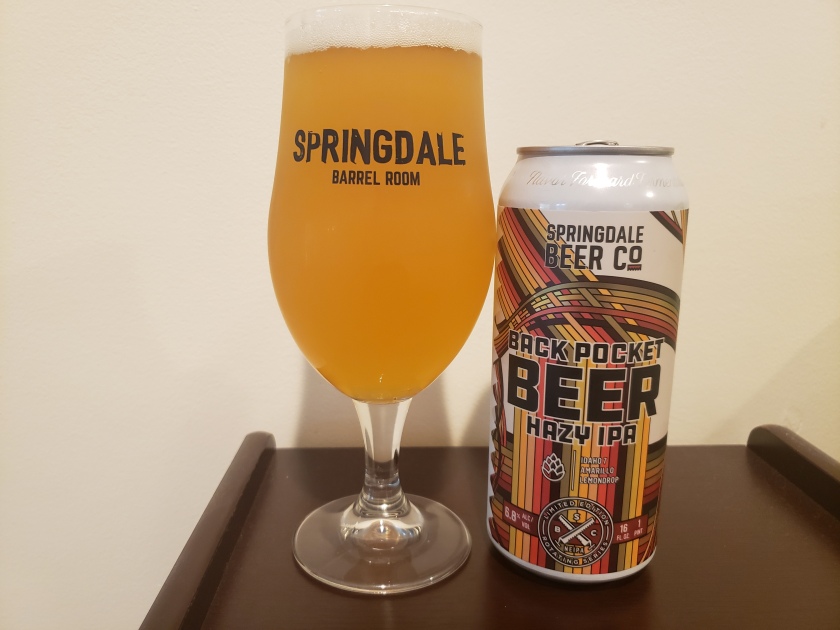 When Springdale refreshed their brand at the beginning of the year it was clear that they were focused on establishing some core flagship beers, including popular staples like Pearly Wit and Brig Stout, along with their new Springdale IPA that I wrote about last month. The exceptions to this focus on core beers are from their unique and interesting barrel program, which has a constantly shifting lineup, and their new rotating series of NEIPAs. Each month Springdale releases a new hazy IPA inspired by a specific band or song, with each song added to a running playlist that serves as the brewery’s inspiration. I love pairing beer and music, last year I wrote a couple pieces pairing songs from two of my favorite artists, Pearl Jam and Chris Cornell, with local beers. One of the recent additions to Springdale’s rotating IPA series is Backpocket Beer, brewed with Idaho 7, Amarillo, and Lemondrop hops and inspired by music from Vulfpeck. Springdale Backpocket Beer is available on a limited basis on draft and in 16 oz cans.

Springdale Backpocket Beer pours slightly hazy light orange with a solid white head. The aroma features lots of hops, heavy on the tropical fruit. The flavor is also very hop-forward, notes of mango, tangerine, and guava along with a very mild and soft bitterness, this is a NEIPA all the way. A malt backbone adds balance along with hints of bread crust and cereal. Backpocket Beer is medium bodied and drinks very easy, at 6.8% ABV it is about average strength for a NEIPA. The finish is crisp with some lingering hop flavor. This is an excellent NEIPA, loads of flavor and well crafted. I can’t wait to sample the rest of the beers in the series. Hoppy Boston score: 4.5/5.