Pearl Jam is my all time favorite band. I started listening to them when Ten first came out (I’m old), got really into their entire catalog in college, and they became my absolute favorite band the first time I saw them live. Over 27 years after they formed the band is still going strong, selling out stadiums and rocking three hour sets that change with every show. This week they are playing two sold-out shows at Fenway, I attended the first show (it was amazing), but will sadly miss night two. With my favorite band in town I decided to write a fun article combining two things I am very passionate about, pairing local beers with some of my favorite Pearl Jam songs. So put on your favorite album, crack a delicious local beer, let me know what you think of my choices and pass on any ideas I might have missed!

Release: Notch Session Pils. Conventional wisdom is to lead off a show with a loud, aggressive track that would immediately capture the audience’s attention, but Pearl Jam typically leads with a song like Release, that slowly builds through subtle layers and eases the crowd in. Notch are the masters of slowly built subtlety, and their session beers are the perfect way to start a long evening. 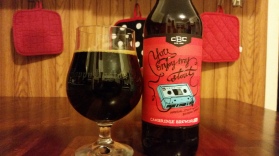 Do the Evolution: The Alchemist Heady Topper. The New England IPA style didn’t come out of nowhere, it was a gradual evolution started by beers like Heady Topper that captured the bold flavors of American hops without the aggressive bitterness. This song headlined the album Yield, which was a turning point for the band, mixing radio-friendly and more experimental tracks and settling into their post-grunge existence.

Hunger Strike: Trillium Sunshower: Yeah, I know this is technically not a Pearl Jam song, but Temple of the Dog was a tribute to Mother Love Bone Singer Andy Wood and this song features the entire current Pearl Jam lineup (Matt Cameron on drums) along with Soundgarden singer Chris Cornell. What better pairing than a Trillium beer named after a song by the Cornell, one of the greatest frontmen in rock history.

Elderly Woman Behind the Counter In a Small Town: Aeronaut Robot Crush. This is a personal connection for me, both the song and the beer immediately make me think of my three year old son Callum. I would sing this song to Callum when he was fussy as a baby, and it remains one of our favorite tracks to sing together. When he got a little older he would ask what I was drinking and instead of saying “beer” I would say the name of the beer. He loved the name Robot Crush so much it he would always ask if that was the beer I was drinking. I can think of no better combination in my mind.

Evenflow: Two Roads Road Jam. Pearl Jam occasionally gets lumped in with jam bands like Phish because of their passionate following and long live sets that cover their entire catalog. Unlike these other bands Pearl Jam doesn’t fill out the sets by noodling through extended versions of songs, they just play a ton of great tunes. One exception is usually radio hit Evenflow, which usually features an extended solo from lead guitarist Mike McCready.

Smile: Wormtown Be Hoppy. The beer has a smiling face right on the can. A happy beer for a song reminding you to smile through the tough times.

Unthought Known: Lamplighter Birds of a Feather. Pearl Jam’s sets usually include a large percentage of classic songs mixed with some newer stuff, and occasionally a track from a recent album, like Unthought Known, emerges as a live favorite. Any of the popular IPAs from Lamplighter would fit here, as they have quickly established themselves as a local powerhouse despite being open for less than two years.

Alive: Smuttynose Finest Kind IPA. A classic beer for a classic track. Although it wasn’t the original intent of the song, Eddie Vedder has stated that every live performance of the song has become a celebration of life. Smuttynose looked like they could be all done, but new ownership has landed and are focused on revitalizing the brand.

Yellow Ledbetter: Allagash Hibernal Fluxus. We will end with a beautiful, complex and slightly strange song paired with a beer that mixes rich roasted malts and expressive Belgian yeast. Both are eclectic and interesting and perfect ways to end the night!