When I attended the Mass Brew Bros. blind tasting of local stouts there was animated conversation amongst the tasters covering all aspects of the local beer scene. One brewery that many talked about in glowing terms was Springdale Brewing, the offshoot of Jack’s Abby that focuses on ales, sours and barrel aged beers. A few of the other beer enthusiasts compared Springdale’s beers favorably to the offerings from some of the most popular breweries in the state. I was a little ashamed to admit that I hadn’t made the trek to Springdale yet, it’s been on my to-do list since the day it opened and I hadn’t found the time. Fortunately I needed something to do for my brother’s birthday, so we grabbed lunch at Jack’s Abby and then a flight of beers at Springdale. I was very impressed by everything I tasted, a nice mix of hoppy, malty, funky and sour offerings. Springdale also cans a number of their IPAs so I grabbed a selection to take home and review. Spoiler alert: these beers were all stellar and I will be making trips to Framingham on a much more regular basis. 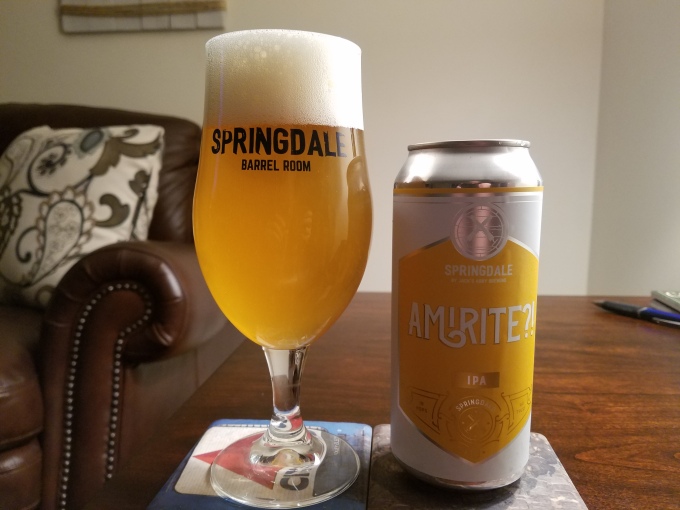 Springdale Amirite?! pours hazy yellow with a massive white head. The aroma is a solid burst of hops, mostly tropical fruit. The flavor is also very hop forward, notes of guava, honeydew and tangerine along with minimal bitterness, this is definitely a New England style IPA. There is just enough malt for balance, hints of bread crust and honey. Amirite?! is very easy to drink, light and refreshing, but packs some punch at 7.3% ABV. The finish is crisp with some lingering fruity hop flavors. This beer is very good, if you like the fruit-forward NE Style IPAs you need to give this a shot. Hoppy Boston score: 4.5/5.

Springdale Good N’ You pours cloudy straw yellow with a solid white head. The scent is a big hit of hops, lots of citrus and some tropical fruit. The hops also lead the flavor, hints of passion fruit, grapefruit, tangerine plus a little pine. Good N’ You would still fall into the New England IPA style but it has a little more bitterness than many beers in the category. The malts round out the flavor with notes of crackers and white bread. Good N’ You is smooth and very drinkable, and a little less boozy at 6.5% ABV. The finish features some strong hop flavors and a crisp bitter bite. This is a top notch IPA, my personal favorite amongst the beers I tasted at Springdale. Hoppy Boston score: 4.75/5.