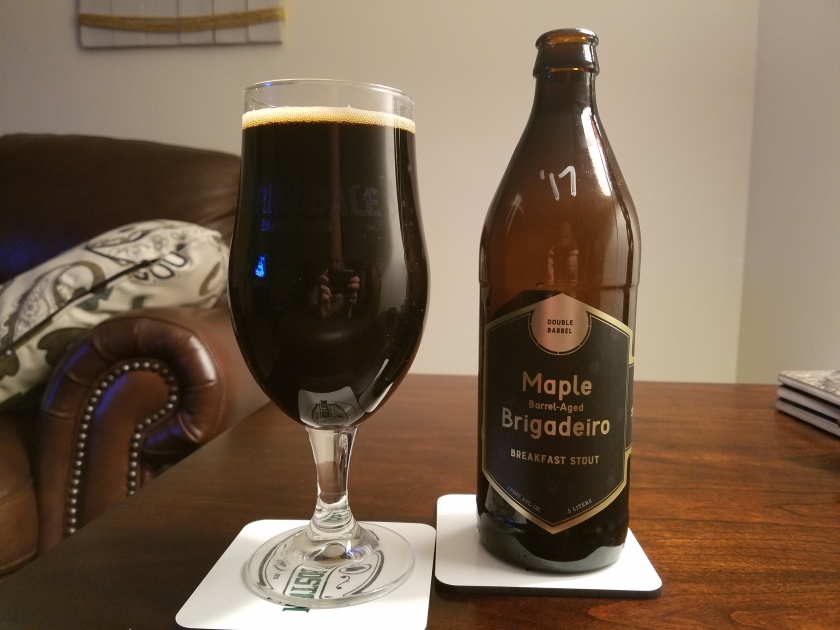 At the beginning of the year Springdale Brewing, the ale-focused offshoot of Jack’s Abby Brewing Company, announced that they would start distributing some of their beers. I like that Springdale took their time heading into distribution, they have made a crazy number of different beers in the last year and the slow rollout let them experiment and perfect their recipes. I have really enjoyed the beers from Springdale, and I hope this distribution leads to more people trying their beer. I am also a fan of the date coding on the hoppy beers, Springdale adds very clear canned on and consume by dates and a directive to store the beer cold. Springdale started distribution with a partial lineup of brands, including Brigadeiro, their breakfast stout which is brewed with coffee, cacao, oats and lactose. On my last visit to the brewery I picked up a few bottles of Maple Barrel Aged Brigadeiro, a blend of batches of the base stout aged in maple syrup and bourbon barrels. Maple Barrel Aged Brigadeiro is available on a rotating basis on draft and in 500 mL bottles.

Springdale Maple Barrel Aged Brigadeiro pours pitch black with a small tan head. The aroma is rich, coffee, bourbon and roasted malts. The flavor is complex between the malts, adjuncts and barrel aging, but everything works well together. The malts add notes of dark chocolate, caramel and mocha. The adjuncts add substantial coffee flavor and just a little sweetness. The bourbon and maple are both on the mild side, they add complexity, a little booze and sugary flavor without overwhelming the underlying beer. There is minimal hops flavor, as you would expect from the style. Maple Barrel Aged Brigadeiro is full bodied but drinks very easy and isn’t overdone at 8.5% ABV. The finish is smooth and rich with some lingering coffee and roasted malt flavors. I really like this beer, too many barrel aged stouts have aggressive whiskey flavors and booziness that overwhelm the rich malt character of the stout. Maple Barrel Aged Brigadeiro manages to meld a huge number of different flavors in a way where each contributes without overwhelming. Nicely done. Hoppy Boston score: 4.5/5.