Spring is here (according to the calendar, you wouldn’t know it with the snow storm in Boston today) and I am starting to turn my fridge over to favor lighter bodied and hoppier offerings. To get that process going I have selected American pale ales as the style of the month for April. The APA style can be very diverse, from slightly darker and maltier versions that mimic traditional British pale ales to juicy hop-bombs that are only distinguishable from IPAs by lower alcohol and bitterness. After the success of Sierra Nevada Pale Ale, American pale ales became a staple style, but they have fallen slightly out of favor due to the session IPA trend (you can make the argument that SIPAs are just APAs with a better marketing campaign, in many cases I’d agree with you). Many brewers still make APAs, and some are extremely good. When Night Shift began transitioning their flagship beers from the adjunct laden bombers that launched the brewery into more hop-forward and standard styles one of the first releases was Whirlpool, an American pale ale with big hop flavors and aromas. Whirlpool quickly became a hit and is now available year round on draft and in 16 oz. tallboy cans. 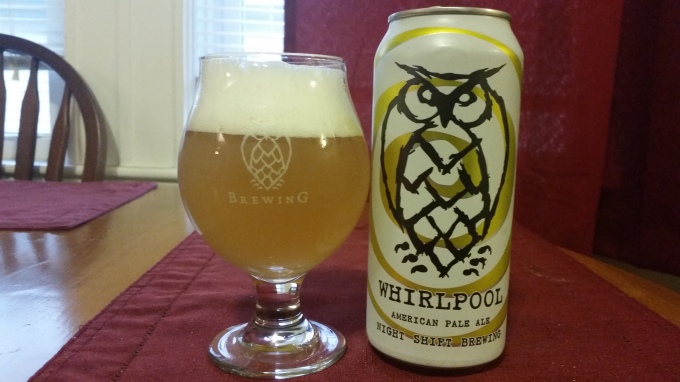 Night Shift Whirlpool pours a hazy light yellow with a huge white head. The scent is a huge burst of fruity New World hops that makes you want to dive right in. The taste is also hop-forward, notes of tangerine, peach, mango and lemon along with a very soft bitter bite. Some malt adds balance, touches of white bread and crackers. The beer is super light bodied and crushable, very much a session beer at 4.5% ABV. The finish is crisp with some lingering hop flavor that urges you to go back in for another sip. We need more American Pale Ales like Night Shift Whirlpool, tons of flavor but still sessionable and super easy to drink. This beer is part of my regular rotation, especially as the weather starts to warm. Hoppy Boston score: 4.5/5.