I think it is very safe to say that American craft beer enthusiasts love their hops. This has led to the emergence of IPAs as probably the most popular style of craft beer. The IPA style has evolved to the point that most of the American versions barely resemble classic British IPAs. New offshoots of the hop-centric beers, like IPL, Belgian IPA, Black IPA and White IPA are also becoming widespread. Leave it to Night Shift Brewing Co. of Everett, MA to take it to another level and brew a pink IPA. Night Shift loves to experiment with adjunct ingredients, I think you could give them almost any edible ingredient and they would find an interesting way to incorporate it into a beer. One of their newest creations is JoJo, an American IPA brewed with hibiscus flowers, resulting in the pink color. In general I try to avoid pink drinks, less because of the color and more due to the memories of sickeningly sweet vodka and rum cocktails designed to mask the flavor of alcohol. I did however gladly make an exception for a pink colored IPA produced by one of the more creative breweries in New England. 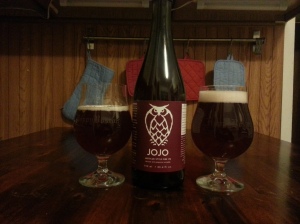 Night Shift JoJo pours a dark pink (I doubt I’ll write that very many times in this blog) with a solid off-white head. The smell is all hops, it starts like a forest floor followed by some scents of citrus and a little tropical fruit. The beer has a deep and complex hop flavor. It begins with pine and earthy notes followed by some lemon and grapefruit. There is a little malt in the backbone, providing a touch of bready and biscuit flavor and offsetting some of the bitterness. There are also some subtle touches of fruity and floral flavors, probably a combination of the hibiscus flowers along with the hops. Night Shift JoJo is medium bodied, solidly bitter and pretty easy to drink at 5.9% ABV. The beer finishes clean with a lasting bitterness on the tongue. Overall JoJo is a well done IPA with some added complexity (and unique color) resulting from the hibiscus flowers. I’m not sure that pink IPAs will become a widespread beer style, but this one is worth picking up. Hoppy Boston score: 4.5/5.

Reviews of other Night Shift beers: