Night Shift Brewing recently opened their brand new brewery and taproom in Everett, MA. New amenities include plenty of parking, a large bar with a variety of seating options, and bathrooms (which were apparently an issue at the old brewery). My lovely wife and I stopped by on opening weekend to check out the new space and taste some of their selections. One of the biggest advantages of visiting breweries is checking out some of the “brewery only” limited release brews. During the grand opening Night Shift was tapping an experimental or limited release beer every couple hours. All of their beers are available in 4 oz tasting pours and 12 oz full pours. We sampled almost everything that was available during the visit, from the spicy Viva Habanera Rye Ale aged on habanero peppers to the hop forward Whirlpool Pale Ale. Normally beers at the brewery are also available for growler fills, but due to the heavy traffic on opening weekend growler fills were suspended. Not a problem for me, it just makes for a good excuse to go back to the brewery soon.

The brewery floor, lots of room for more expansion. 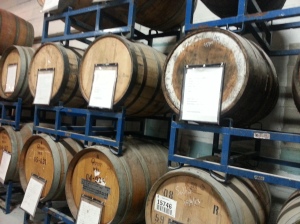 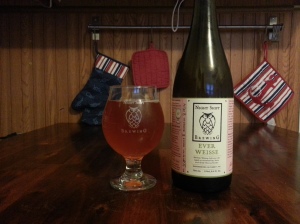 At the end of my visit I grabbed a bottle of Night Shift Ever Weisse, a Berliner Weisse aged on strawberries, kiwis and dried hibiscus flowers (I also picked up the perfect glass to enjoy the beer from). I’ve been attempting to develop a taste for sour styles, and I’ve been told that light and refreshing Berliner Weisse beers are an ideal place to start. Night Shift Ever Weisse pours an orange tinted pink, slightly hazy with a mild white head. The smell is dominated by fruit scents, strawberry and kiwi along with a little citrus acidity. The first sip gives a nice tart bite, solid without being overwhelming. There is significant fruit flavor with notes of strawberry, cherry and raspberry along with some spiciness from the wheat. There isn’t much hop character, but the tart acidity from the fermentation balances out the sweetness of the fruit. Night Shift Ever Weisse is very drinkable, a great beer for summer. At 5.0% ABV it is actually on the strong side for the style (most Berliner Weisse beers are in the 3-4% range), but still light compared to many craft beers. I have just started to drink sour beer styles and I still feel like I am getting my feet wet. This beer though is well balanced, the sourness is present without overpowering your palate. Highly recommended.