Every November since early in college I have taken a trip to Vermont with a group of buddies to attend a wild game supper followed by an overnight in a hotel joking around and drinking beer. It is one of my favorite weekends of the year, and while the tradition remains it has evolved over time. We’ve gone from 4-6 guys per room in our early 20’s to individual rooms now that we have better paychecks. Bedtime is later than normal for me, but much earlier than it used to be. Our drinking selections have changed too, from PBR and Jack Daniels in the early years slowly evolving into a powerhouse of quality craft beers. Last year we added a detour to start the trip, with a stop at Hill Farmstead in Vermont. This stop was well received amongst the growing number of beer geeks in the group, and tolerated by the rest, so it is becoming part of the tradition. I grabbed a whole host of beers to bring home, IPAs as well as a selection of farmhouse ales. Included in my selections was Double Nelson, a DIPA highlighting Nelson Sauvin hops, and Civil Disobedience #27, a blended farmhouse ale you can read about here (because I am too lazy to write about all of the different beers that were put into it). Both beers are available nearly exclusively at the brewery on a rotating basis (in the case of Double Nelson) or as a one-off (for each Civil Disobedience release).

Hill Farmstead Double Nelson pours murky deep yellow with a solid white head. The aroma is all fruity hops. This is a hop bomb New England style DIPA, notes of white grape, papaya, mango, and herbs along with a soft bitterness. A sturdy malt backbone balances the hops and adds hints of crackers and bread crust. Double Nelson is medium-bodied and drinks very easy for a beer with 8% ABV. The finish is crisp with plenty of lingering hop flavor and just a hint of sweetness. These single hop beers from Hill Farmstead are consistently awesome, and this is no exception, huge flavors and very well crafted. Hoppy Boston score: 4.75/5. 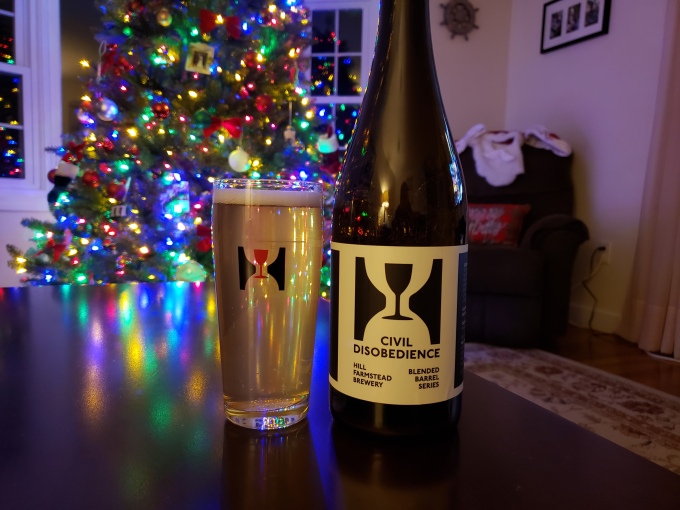 Hill Farmstead Civil Disobedience #27 pours clear pale yellow with a solid white head. The aroma is complex with some acid, funk, and fruitiness. The flavors imparted by the fermentation and barrel aging of the various beers leads the way with notes of green apple, barnyard, peppercorn, oak, and sour cherry along with a present but not overpowering tartness. The pale malt backbone adds hints of cereal and bread dough, and there is minimal hop flavor. Civil Disobedience #27 is light and spritzy, the ABV isn’t listed on the bottle or online, but it’s probably moderate based on the beers used in the blend. The finish is dry with some lingering flavors from the yeast. This is another interesting, complex and flavorful beer from Hill Farmstead’s barrel program, their hoppy beers are delicious but these beers set them apart. Hoppy Boston score: 4.5/5.