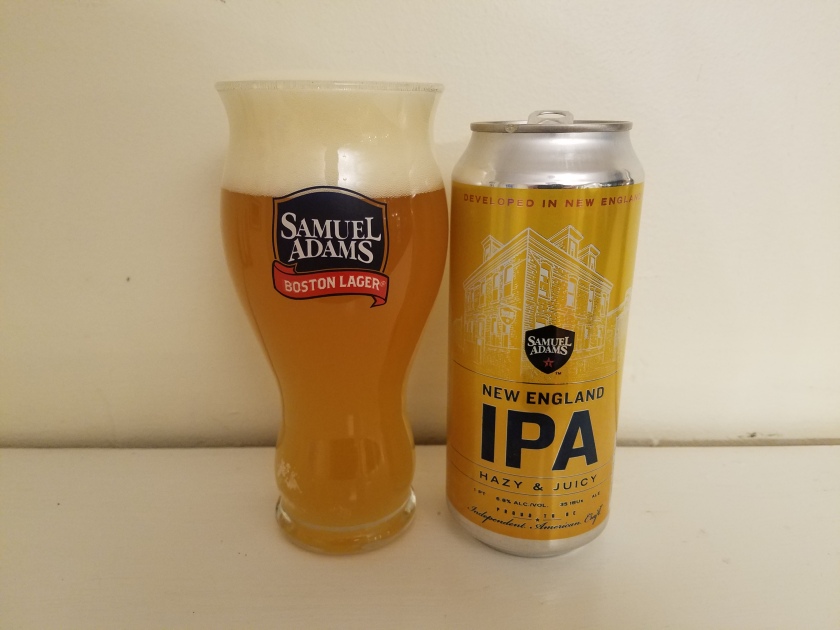 It has been a rough couple of years for the Sam Adams brand. While their parent company Boston Beer has had some success with their hard cider, tea and seltzer business their share of the beer market has slipped. As big beer buys out craft brands and takes them national and the explosion of small local breweries continues the national and regional craft brewers are feeling heavy competition from both sides. One small but important step that Sam Adams has taken over the last year was re-establishing their home base in Boston. Their Jamaica Plain brewery now features a full taproom, there are rumors flying of another site in progress, and Sam Adams is now the official beer of the Red Sox and Fenway Park. This had led to a substantial amount of positive press and Sam Adams has attempted to keep the ball rolling by releasing a couple of exciting new beers. The first is their take on the trendy New England style IPA, a hazy and hop forward beer with low bitterness. The second is Sam ’76, an innovative beer that is a blend of an ale and a lager. Both beers are available now on draft and in cans (FYI-The Sam ’76 was a brewery provided sample).

Sam Adams New England Style IPA pours hazy light yellow with a solid white head. The aroma is a solid burst of fruity hops. The flavor is also very hop forward, notes of tangerine, papaya and stone fruit along with minimal bitterness. This is balanced by a mild malt backbone, hints of white bread and crackers. Sam Adams NEIPA is light and easy to drink, and at 6.8% ABV, has moderate alcohol for the style. The finish is crisp with some lingering hops. This is a solid New England style IPA, I’ve had better versions, and I’ve had many worse, but you’ll have a tough time beating this price point (~$10 a 4/pk). The big challenge for Sam Adams will be making sure drinkers get fresh beer, if this is sitting around on shelves for months I imagine it will degrade quickly. Hoppy Boston score: 4.25/5. 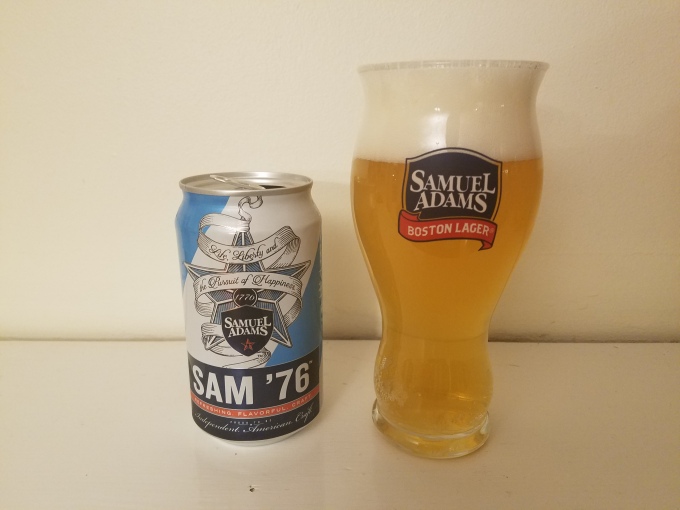 Sam Adams Sam ’76 pours clear light yellow with a massive white head. The scent is mild, grassy hops and pale malt. Sam ’76 is balanced, light and easy to drink. There is solid hop flavor, notes of lemon, herbs and orange along with a crisp bite. This is complemented by a light malt backbone, touches of cereal and bread dough. The finish is crisp and very clean with minimal aftertaste, sessionable at 4.7% ABV. This is a really nice beer, flavorful and super drinkable. The rumor is that Sam ’76 is going to be a key beer in the Sam Adams deal with the Red Sox and I can see why, I could crush a few of these at Fenway on a warm summer day. Hoppy Boston score: 4.25/5.