Craft brewers seem to be very competitive, which has led to the rise of a number of judged beer competitions in the US and internationally. Typically brewers submit their strongest beers and a set of judges do a blind tasting and award medals for the best beers in a particular style. I tend to take the results of these competitions with a grain of salt. Many breweries make small batch beers just to enter in competition and raise awareness for their brewery. It also takes some research to find out what the quality of competition or the qualifications of the judges were. You even get stories like THIS, where a brewery accidentally submitted a beer of the wrong style but was still awarded a medal by the judges. All that being said, when a local beer wins medals at major festivals, it draws my attention. Sam Adams has won a gold medal at the prestigious Great American Beer Festival for their Double Bock each of the last two years. Since it is officially Dopplebock Week on Hoppy Boston I would be remiss to neglect this entry. Sam Adams brews their Double Bock with a blend of two row malts along with caramel malt, then hops with Tettnang Tettnanger and Hallertau Mittelfrueh hops. It is available on draft and in 22 oz. bottles during the winter. 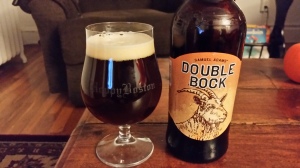 Sam Adams Double Bock pours a deep reddish brown with a substantial cream colored head. The scent is mostly malt, some dark fruit and chocolate. The taste is also very malt forward, notes of plum, raisin, milk chocolate, and fresh bread. As you expect with this style there is very low hop character. The German style lager yeast gives the beer a clean and drinkable character, and also adds some subtle clove flavor. Sam Adams Double Bock drinks incredibly easy for a beer with 9.5% ABV and finishes smooth with a hint of sweetness in the aftertaste. This is a very good version of a dopplebock, I understand why it has received so much acclaim. Hoppy Boston score: 4.5/5.