The original Narragansett beer brand was founded in the state of Rhode Island in 1890 and they brewed beer in the state until the 1980’s. Narragansett even shares it’s name with a town and a bay in the state that are both popular tourist destinations. It’s history and recent rebirth make Narragansett arguably the most recognizable beer from Rhode Island, but the beers you’ve been seeing on the shelves the last few years weren’t brewed in Rhode Island. When new ownership bought the brand and set about revitalizing it they used contract brewers to produce the line of immediately recognizable tallboy cans. That is changing now. Over the last year Narragansett has been building a start-of-the-art brewery and taproom in Rhode Island. The taproom isn’t open yet, but the brewery is getting rolling and they are celebrating with a new IPA called It’s About Time. Narragansett It’s About Time IPA is brewed to combine the classic IPA malt body with a large dose of modern Citra and Cascade hops. The beer is available now on draft and in 12 oz. cans. 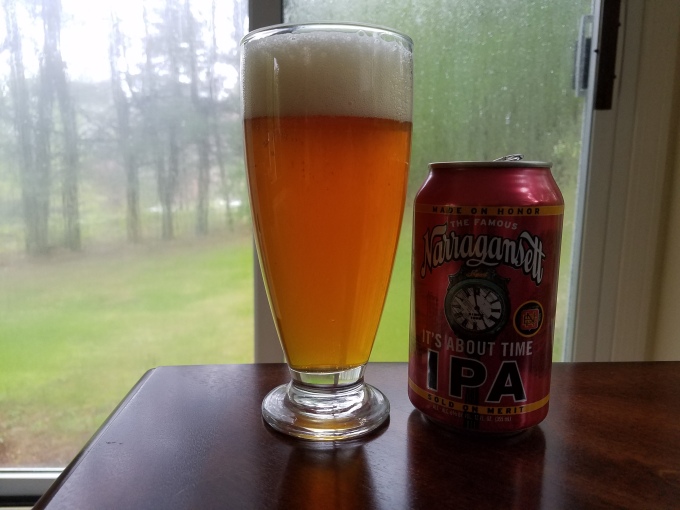 Narragansett It’s About Time IPA pours a clear deep orange with a solid off-white head. The scent is a solid hit of hops, lots of citrus with some herbs and resin. The flavor is hop forward, notes of grapefruit, pine and grass along with a hit of bitterness. There is noticeable malt balance, hints of bread dough and crackers. It’s About Time IPA is medium bodied and smooth, not too boozy at 6% ABV. The finish is crisp with some lingering hop flavor and bite. This is a solid IPA, I imagine it will quickly become one of Narragansett’s most popular offerings. My one criticism, I would have loved it in the 16 oz. tallboy can, something that Narragansett is so well known for but didn’t use here. Hoppy Boston score: 4.0/5.