A couple of weeks ago I wrote a post about what my drinking “theme” would be for Fall (find it HERE). Since I didn’t have a huge list of malt-forward craft lagers to choose from I asked for any suggestions my readers might have to expand my list (I will still take any suggestions that haven’t been mentioned). I received a number of good ideas, thanks to everyone who passed them along. There was only one beer that was recommended multiple times, and it was Narragansett Fest Lager. Granted, the two people who made the recommendation both live in Rhode Island, are passionate about the revived Narragansett brand, and happen to be married to each other. Still, they both felt the need to pass on the recommendation. So, Tim and Amanda, this post is for you. Many people still associate the Narragansett brand entirely with their lager, which is local competition to PBR (and might grab a bigger market share now that Pabst sold out to the Russians). The re-launched brand has also included a full list of seasonal beers, all sold on draft and in their distinctive 16 oz. “tall boy” cans. Fest Lager is Narragansett’s Fall seasonal, a traditional German style Octoberfest. Fest is brewed with light and dark Munich malts in addition to Vienna and pilsner malt, then hopped with Northern Brewer and Tettnanger hops. 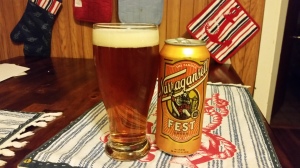 Narragansett Fest pours a clear deep amber with a moderate off-white head (normally I would just pound anything from ‘Gansett right out of the can, but for this exercise I classed it up with a glass). The smell is very mild, just a hint of toasty malt aroma. The taste is solidly malt forward, caramel, well done whole grain toast and some subtle malt sweetness. A gentle touch of earthy hops provide a little balance, but true to the style this is a malt-forward beer. The beer is smooth and drinkable, with medium body and 5.5% ABV. The finish is clean with a faint, lingering malt sweetness in the aftertaste. This is a very solid version of a German Octoberfest, especially with the lower price point compared to many craft offerings. Hoppy Boston score: 4.0/5