Industrial Way in Portland has become one of the most successful brewery incubators in the country. This industrial park houses Allagash, one of the best Belgian style breweries in the US as well as Geary’s, the first post-prohibition brewery in Maine. Across from Allagash is One Industrial Way, a series of small warehouses where many of the best breweries in the state got their start. One Industrial Way was the original home of Maine Beer Company, Bissell Brothers and Rising Tide, three of the most popular breweries in Maine. It now houses Foundation Brewing, Austin Street and a brand new addition, Battery Steele. Battery Steele was founded by Shane Noble and Jake Condon, who came up with the idea while they both worked at Gritty McDuff’s. This is an ideal situation for a startup, the area attracts huge crowds of beer lovers who are always ready to sample something new. When I stopped by Battery Steele had just opened the week before but was already packed with people excited to try their beers. I grabbed a 4-pack of Kineo, and IPA brewed with Mosaic and Citra hops. Battery Steele Kineo is available now on draft and in 16 oz. tallboy cans. 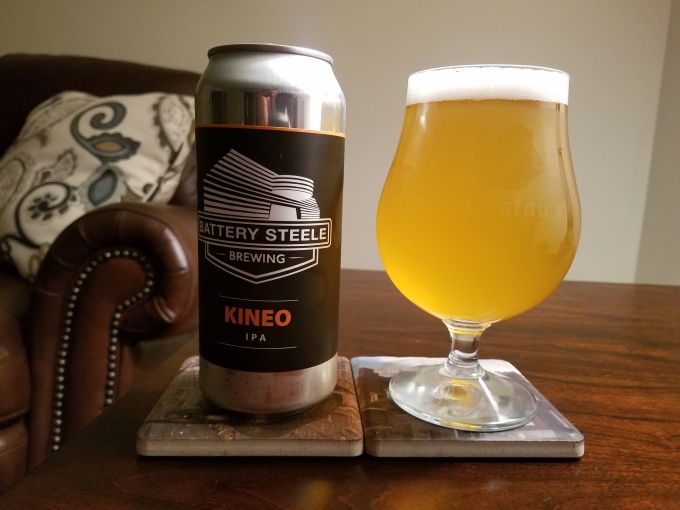 Battery Steele Kineo IPA pours a hazy yellow with a solid white head. The scent is solidly hoppy, mostly tropical fruit. This is very much a New England IPA. There is plenty of hop flavor with notes of passion fruit, melon and grapefruit and a very mild bitterness. This is balanced by a touch of malt, hints of white bread and cereal. Kineo is light bodied and easy to drink with moderate alcohol at 6.5% ABV. The finish is crisp with lingering hop flavor. Kineo is a very solid start for Battery Steele, I’m looking forward to visiting again on my next trip up to Industrial Way! Hoppy Boston score: 4.25/5.