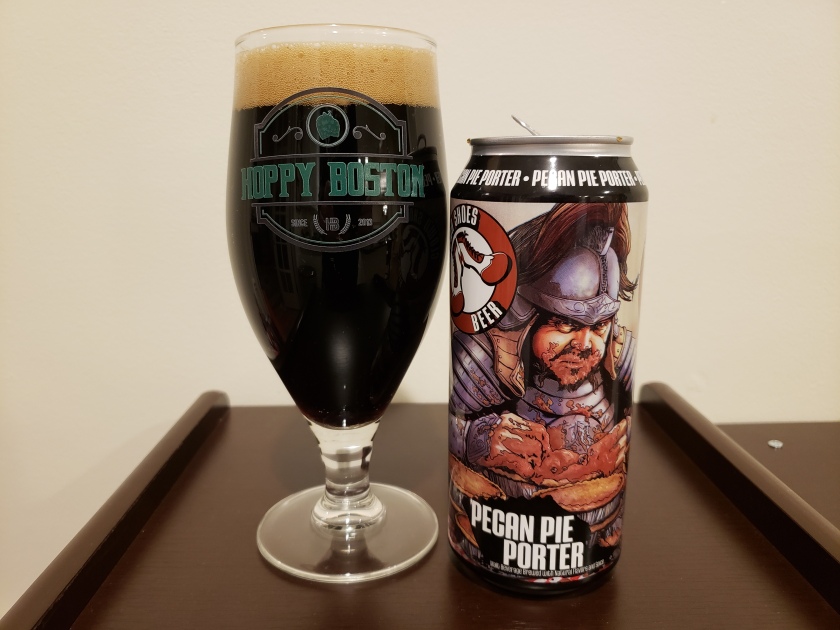 When I wrote my goals for Hoppy Boston in 2019 I mentioned that I wanted to stop chasing whalez and re-visit some breweries that I had neglected for too long. As part of this I also hope to write more articles and reviews on beers and breweries that are a little under the radar. I would especially like to shine some light on the veteran breweries that have made good beer for many years but don’t have the cache of the ultra-hyped newer breweries who are churning out a new haze bomb every week. I know there are many breweries that I haven’t written about in a long time, some that I have enjoyed in the past and some that I need to give another chance. One brewery that I haven’t written about in a while is Clown Shoes, the last time I reviewed a beer from the brewery was in August of 2016. Since that last review Clown Shoes was purchased by Harpoon, and is now produced and served at the Harpoon breweries in Boston and Vermont. I recently grabbed some Pecan Pie Porter, and annual fall/winter Clown Shoes release. Each year Clown Shoes makes a slightly different version of the beer. Clown Shoes Pecan Pie Porter is now distributed on draft and in 16 oz cans.

Clown Shoes Pecan Pie Porter pours deep brown with a solid tan head. The aroma features some roasted malts and a hint of spice. The malts lead the flavor, notes of chocolate, caramel and roasted nuts. The spices are present but play a supporting role, touches of cinnamon and cardamom. There is a little late hop character, rounding out the flavor and adding some grassy and earthy notes. Pecan Pie Porter is medium bodied and very smooth, but not a light beer at 8.0% ABV. The finish is crisp with just a touch of lingering malt flavor. This is an interesting beer, a creative take on the porter style that would go well with many rich desserts. Hoppy Boston score: 4.0/5.