Many breweries are now featuring “rotating series” beers, at least partially in response to the beer drinkers who are always chasing something new and different. Most of these beers are IPAs (or other hop-bombs) with the same malt bill and a constantly changing hop schedule, either showcasing a single variety of hops or a mixture of a few. Wormtown Brewery went in a completely different direction for their rotating series, releasing an array of classic and innovative lager styles. This is a great idea, there are so many different lager styles which makes it easy to brew beers that complement the different seasons of New England. I really hope they use this series to showcase some less appreciated types of lager. Wormtown has dubbed their lager series “Mass Produced Lager” a play on words poking fun at the long held disdain of light lager styles by the craft beer community while paying tribute to the their home state. One recent addition to the Mass Produced Lager series is Fresh Hop, brewed with locally sourced hops fresh from the fall harvest. Wormtown Mass Produced Lager: Fresh Hop is available now on draft and in 16 oz cans. 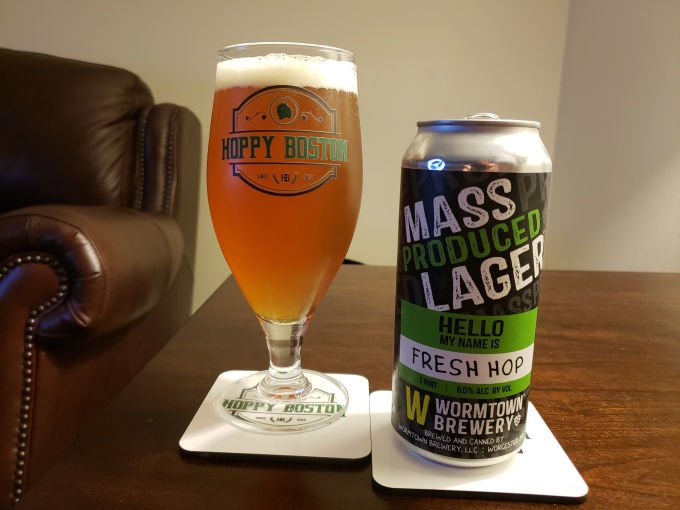 Wormtown Mass Produced Lager: Fresh Hop pours clear copper with a massive off-white head. The aroma is all pungent fresh hops, floral, herbal and fruity. The flavor is also very hop forward, notes of pine, grapefruit, orange pith and cut grass along with a solid bitter bite. This is complemented by some light malts, hints of bread dough and cereal. Fresh Hop has a medium-light body, drinks very easy but packs a little punch at 6.0% ABV. It finishes crisp and clean with some lingering hop flavor. This is a really nice wet hop beer, like a lager version of a west coast IPA. I can’t wait to check out some of the other lagers in this series. Hoppy Boston score 4.5/5.