I make 2-3 trips a year up to mid-coast Maine to visit family and friends in the area where I was born and raised, the first trip this year was over the holiday weekend. Even with the additional demands of traveling with a child, I am usually able to make some beer-centric stops on the way, so you can expect to see reviews of a number of Maine beers populate Hoppy Boston over the next few weeks. One very frequent stop is Gritty McDuff’s in Freeport. Gritty’s has three pubs in Maine, each serving a full menu of pub fare along with a number of their own brews. Gritty’s also distributes their beer in bottles, but they seem to be focusing more on the restaurant business, as it’s now rare to see their beers in Massachusetts (you see them more in shops in Maine). I’m a big fan of their pubs, well made food, good atmosphere, family friendly during mealtimes, and a good selection of traditional British ales including a few on cask. While I drank a cask IPA with my lunch, I also grabbed some bottles of Vacationland, a blonde ale brewed as Gritty’s summer seasonal. Gritty’s Vacationland is brewed with Cascade and Saaz hops and is available April through August on draft and in 12 and 22 oz. bottles. 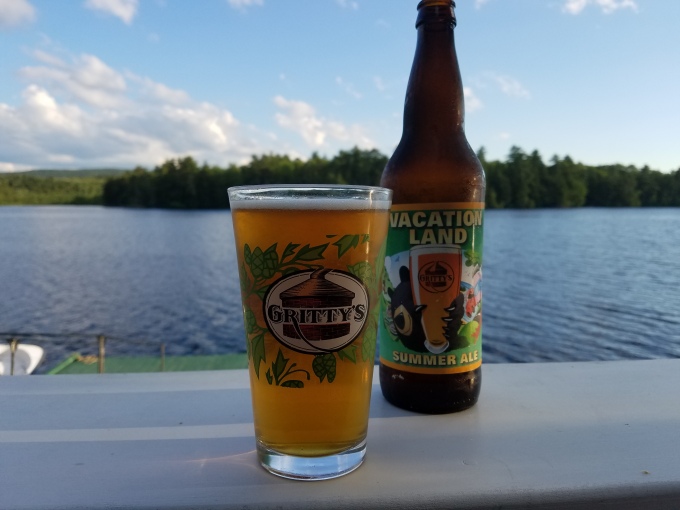 Gritty McDuff’s Vacationland pours clear light yellow with a solid white head. The aroma is a mixture of light malts and floral hops. The flavor is balanced. The hops are pronounced for a blonde, notes of lemon, cut grass and herbs along with a crisp bitterness. This is balanced by pale malts, touches of white bread and crackers. Vacationland is light and very easy to drink, sessionable at 4.8% ABV. The finish is crisp and dry, very clean for an ale. Gritty McDuff’s Vacationland is a very nice summer beer, crushable, refreshing and full flavored. Hoppy Boston score: 4.25/5.