Most breweries tend to stick to a rotation of classic styles for their flagship beers, usually an IPA (or a couple), a dark beer like a porter or a stout, and a lighter offering like a blond ale or a pilsner. These are tried and true styles and it makes sense to introduce the brewery to your customers with beers they will easily identify with. Things start to get interesting and more diverse when you get into seasonal and special release beers, especially when breweries establish a barrel aging program. Banded Horn Brewery came out of the gate with the IPA/DIPA combo you would expect, along with some seasonal dark beers, but they also make a line of flavorful lighter lagers. I’ve enjoyed the Banded Horn beers that I’ve tried, but I was excited to see some of their more creative offerings too. One beer that falls into that category is Vertumnus a version of their flagship Veridian IPA aged in oak barrels with Brettanomyces. Banded Horn Vertumnus is available on a rotating basis in 375 mL bottles. 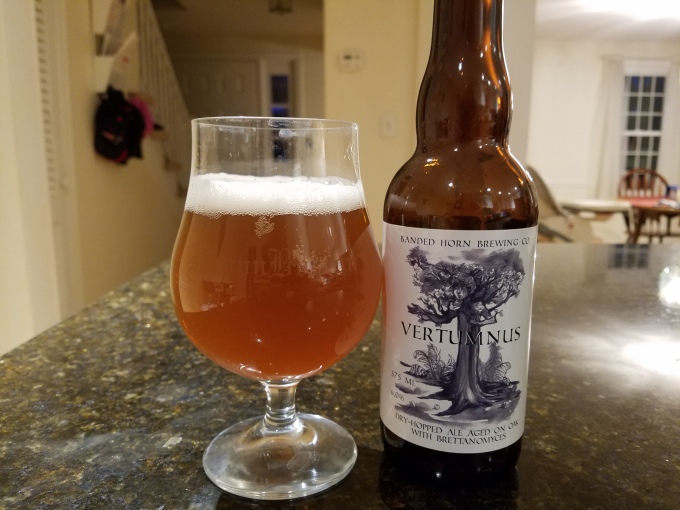 Banded Horn Vertumnus pours a deep brownish orange with a solid white head. The scent is a mixture of musty Brettanomyces and floral hops. The yeast leads the flavor, notes of barnyard and cheese rind, funky but not sour. There is some hop flavor too, hints of lemon, grass and herbs along with a drying bitterness. The malts round out the flavor with touches of bread dough and biscuits. Vertumnus is light bodied and complex, but not too boozy at 6.0% ABV. The finish is dry with some lingering funky Brett flavors. I like the idea of aging Banded Horn’s flagship IPA with Brett. As more drinkers gain an appreciation for Brett beers it will be interesting to see if more breweries make similar offerings. Hoppy Boston score: 4.0/5.