There are so many breweries that have opened in the last few years that I have a hard time keeping track of the beers being produced in Eastern Massachusetts, let alone keeping up with all of the new breweries throughout New England. I’ve considered keeping Hoppy Boston’s focus on MA beers, but it’s fun to try things from across the region. New England isn’t that big anyways, with a short drive can try amazing beers in every New England state. You can also have awesome friends who bring you beers from their travels. My friends Tim and Amanda live in Providence and recently came to a get together at our house with a bunch of local beers that haven’t made their way to Massachusetts yet. Many of these beers were consumed that night, but I set aside a sample pack from Bucket Brewery in Pawtucket. It took me a little time to get around to writing my thoughts, better late than never I guess. A couple of the beer I sampled were Pawtucket Pale Ale, a balanced APA, and Black Goat of the Woods, a milk stout brewed with ginger and cinnamon. All of Bucket’s selections are available on draft and in 12 oz. cans.

Bucket Brewery Pawtucket Pale Ale pours a deep amber with a small white head. The aroma is mild, a bit of fruity hops. The flavor is balanced, much more malty than many of the newer style American pale ales. There is solid hop flavor, touches of orange, guava, grass and pine along with a little bitter bite. This is complemented by the malt, notes of caramel and whole grain bread along with substantial body. Pawtucket Pale Ale drinks easy at 5.5% ABV and finishes with a mixture of sweet malt and bitter hops. This is a solid beer, especially if you like more balanced, British inspired pale ales. Hoppy Boston score 4.0/5. 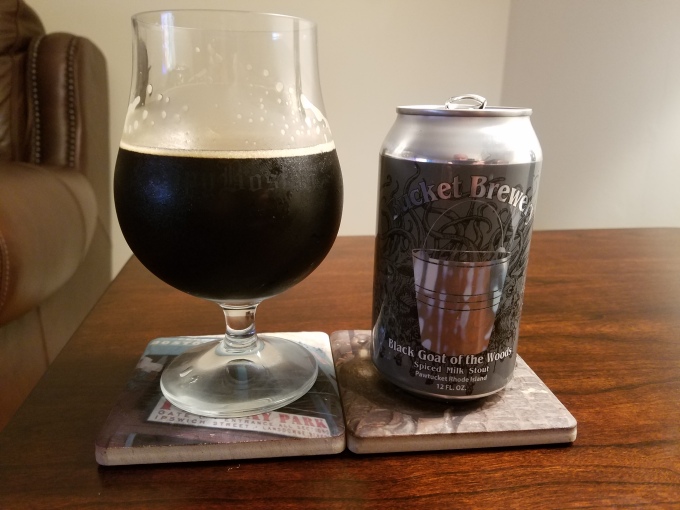 Bucket Black Goat of the Woods pours pitch black with a small tan head. The scent features some rich roasted malts and a hint of spice. The flavor is very malt forward, notes of cocoa, caramel and weak coffee. The spices are subtle, you get faint hints of cinnamon and ginger that add some complexity. The hops are almost non-existent in this beer, which leans toward sweet. The body is a touch thin for a stout, but the beer drinks smooth and has moderate alcohol at 6.5% ABV. Black Goat of the Woods is an interesting beer, with a few tweaks I think it could be very good. Hoppy Boston score: 3.75/5.