I really wish every brewer would put dates on all of their packaged beers. It sucks as a consumer (and as a beer reviewer) when I buy something that tastes a little off or unexpected and I don’t know if it was a flaw in recipe, a quality control issue or the beer is just out of date. This is especially true with hop-forward or dry-hopped beers, the aroma from the hops dissipates quickly so it’s really important to drink the beer very fresh. Good bottle shops will usually do a quality job of rotating their beers to keep fresh beers on the shelves, but even the best can accidentally sell beers that are past peak freshness. I ran into this issue recently with Kent Falls Alternate World, which was advertised as a dry-hopped gose, but I got little or no hop flavor or aroma. I am a fan of Kent Falls and I have enjoyed most of the beers I’ve sampled from the brewery, so I wanted to know if this was a bad batch or just well past it’s peak. Unfortunately, there was no date on the bottle that I could find, so I really have no idea. Alternate world is a gose fermented with Brettanomyces and then dry-hopped with American hops before bottling. 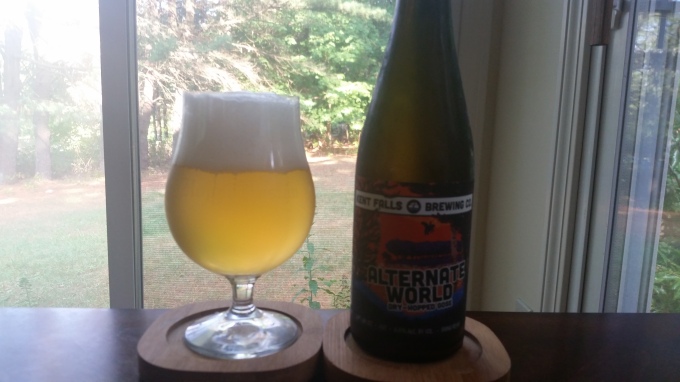 Kent Falls Alternate World pours a clear straw yellow with a massive white head. The scent includes some mild acidity and an extremely subtle aroma of floral hops. The yeast/lacto leads the flavor, notes of lemon, sour apple and barnyard funk along with a little tartness. Again the hops are not as evident as the title would suggest, a touch of cut grass and herbs. The light malts round out the flavor, notes of white bread and cracked grain. Alternate World is light and refreshing, sessionable at 4.6% ABV. The finish is dry with just a little pucker and salinity. I actually really enjoyed Alternate World as a complex and easy to drink gose, but was disappointed by the lack of hop flavor and aroma. Hopefully I’ll get to try another batch at some point. Hoppy Boston score: 4.0/5.