The main purpose of my pit stop in Connecticut a few weeks ago was to grab a number of local beers that weren’t available in Massachusetts yet. I hoped to get some background on these breweries to help plan for my future trips south, but I also wanted to know more about these breweries before they start to expand distribution into the Bay State. I am sure that many have at least tentative plans to someday sell their beer in MA, but I had no idea that one of these breweries would begin expanded distribution before I even had a chance to review the beer I had purchased. The brewery is Kent Falls Brewing Company. While many brewers brew “farmhouse style” ales in industrial parks and warehouses, Kent Falls brews their beer on a fully functional farm in Kent, CT. All of their beers focus on locally sourced ingredients, and one of the main crops on the farm is hops. One of Kent Falls Brewing Company’s most popular offerings is the constantly evolving Field Beer Saison series. Each beer in the series is made with the addition of a local adjunct grain to complement the 100% CT grown barley and hops. They also use a house yeast culture that adds some tart flavors to the profile. The third batch of Field Beer Saison features raw spelt from the Hudson Valley, adding rustic flavors and a dry finish that complements the house yeast. 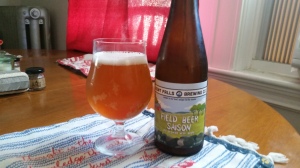 Kent Falls Field Beer Saison #3 pours a pale orange with a mild white head. The scent is fruity and spicy Belgian style yeast along with a little acidity. The yeast leads the flavor too, touches of sour apple, apricot, pepper and must. There is also noticeable hop character, some lemon and grass along with a crisp bitterness that complements the mild tartness from the yeast. The malt body rounds out the flavor with notes of crusty bread, honey and whole grains. The beer is light bodied and very easy to drink, with moderate 5.2% ABV. This beer is really complex between the expressive yeast, hops and malts, but everything works well together and no single flavor overwhelms the others. I really enjoyed this beer and look forward to trying more of their offerings as they start to make their way into Massachusetts! Hoppy Boston score: 4.5/5