Backlash brewing has gone through a number of big changes in the last year plus. Like many brewers they have moved their packaging strategy away from 22 oz. bottles and towards cans. Co-founder Helder Pimentel has been outspoken about the death of large format bottles, customers seem to prefer 4/6/12 packs and breweries that relied on bombers have needed to adapt. The need to change to cans has led Backlash on an odyssey to find a new place to brew, they don’t have their own production facility and many breweries that used to share time with contract brewers have stopped taking on contracts due to increased demand for their own products. You might have noticed a period where Backlash’s flagship beers were hard to find in bottle shops, and this was the reason why. Finally, Backlash abandoned their best selling beer, Belgian style IPA Declaration, in favor of Ricochet, a West Coast style IPA. Ricochet went through a number of draft-only test batches to perfect the recipe, but you can now find it in 4 packs of 16 oz. tallboy cans. It is good to see Backlash beers back on store shelves, and I look forward to seeing what is in store for the brewery next! 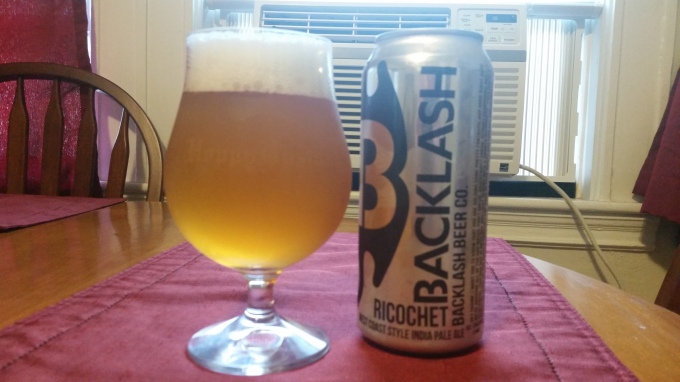 Backlash Ricochet pours a hazy golden yellow with a substantial off-white head. The scent is solidly hoppy, citrus fruit and resin. The taste is also very hop-forward, notes of grapefruit, pine, tangerine and papaya along with a soft bitterness. There is just enough malt for balance, touches of bread dough and biscuits. Ricochet is light bodied and very easy to drink but packs a little punch at 7.2% ABV. The finish is crisp and clean with some lingering hop flavor. I really enjoyed Ricochet, there are so many good IPAs being brewed locally and this holds up to the high standards. I am glad they took their time and got the beer right, local IPA fans should definitely give Backlash Ricochet a shot! Hoppy Boston score: 4.5/5.