There are a number of beer styles that work well with hot summer weather and one is clearly pilsner, especially the flavorful versions being produced by many talented American brewers. A crisp, drinkable and flavorful pilsner is perfect for grilling, hanging out at the beach or quenching your thirst after some time outside. My new house now has a sweet new grill, and also a large lawn that needs to be mowed, so I need to keep a stable of refreshing beers on hand all times. One pilsner I enjoyed recently is Riverbend Pils, a limited release from Ipswich Brewing Company. Riverbend Pils is a celebration of the brewery’s 25th anniversary, and a portion of the sales benefit the Ipswich River Watershed Association, a non-profit that helps protect this waterway which provides drinking (and brewing) water for many in the area. The beer is brewed with German malts along with a mixture of traditional Saaz hops and not-at-all traditional Lemondrop hops. Ipswich Riverbend Pils is available this summer on draft and in 22 oz. bottles. 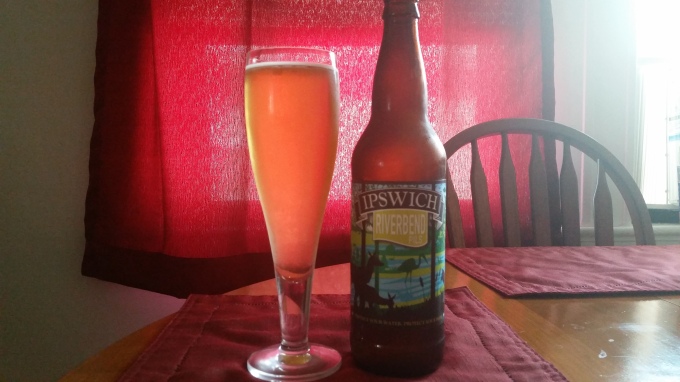 Ipswich Riverbend Pils pours crystal clear golden yellow with a small white head. The scent is mild, some light malt and noble hops. The beer is crisp, clean and very refreshing, perfect for the hot weather of mid-summer. This isn’t a hoppy beer by current standards, but there is noticeable hop flavor, notes of grass, herbs, earth and lemon along with a little bitter bite. This is complemented by the malts, touches of crackers and white bread. Riverbend Pils is very light and easy to drink, at 4.6% ABV it is sessionable by many standards. The finish is classic lager, just a hint of hoppy aftertaste that keeps you coming back for more. This is a great version of a pilsner, right now it is listed as a limited release but I hope Ipswich makes it their regular summer beer because it is delicious. Hoppy Boston score: 4.75/5