Ipswich Ale Brewery has been brewing a range of traditional and experimental ales in Ipswich, MA since 1991. Ipswich makes year-round beers ranging from a light and hoppy pale ale to a dark oatmeal stout, along with a series of seasonal brews. All of their beers are available on draft, and most are sold in 12 oz. and 22 oz. bottles. Ipswich’s Fall seasonal beer is Harvest Ale, an amber ale. Most craft breweries make Fall seasonals that are either German inspired Octoberfest beers (typically Marzens) or the ubiquitous pumpkin spiced beer. As an alternative, I like to seek out breweries who think a little more outside of the box for their Fall seasonal offerings. American amber ales tend toward a balance between a strong malty backbone with solid hop character, making them substantial enough for cool Fall nights. With the popularity of highly hopped beer, many amber ales are nearly IPAs, just with darker and fuller malt backbones. Ipswich Harvest Ale is brewed with Caramunich malt along with some chocolate malt for a darker color and malt sweetness, balanced by a a bitterness from Warrior, Ahtanum and Columbus hop varieties. 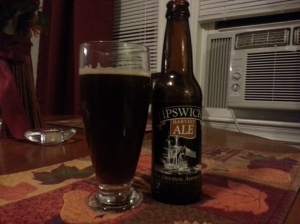 Ipswich Harvest Ale pours a dark reddish-brown with a small and quickly dissipating white head. The first smell is sweetness and brown sugar from the dark malts, followed by some earth and pine notes from the hops. The malt is also very evident in the taste, with flavors of toffee, caramel and some chocolate coming through strongly. This is balanced well by the hops, which provide a complementary bitterness along with flavors of lemon and resin. Some American ambers taste like an IPA with a little extra dark malt, but this beer strives for more balance, like a hoppier version of a brown ale. At 6.9% ABV Ipswich Harvest Ale is substantial, but it’s easy enough to drink with just a touch of warming alcohol in the flavor. This beer would be great with a Thanksgiving dinner, or as a nice complement to some apple pie afterwards. A solid and substantial beer for the Fall season. Hoppy Boston score: 4.0/5.