Yesterday I reviewed the first three beers in Sierra Nevada’s Beer Camp 12-pack. Today I’ll continue with the final three and some thought on the pack as a whole. 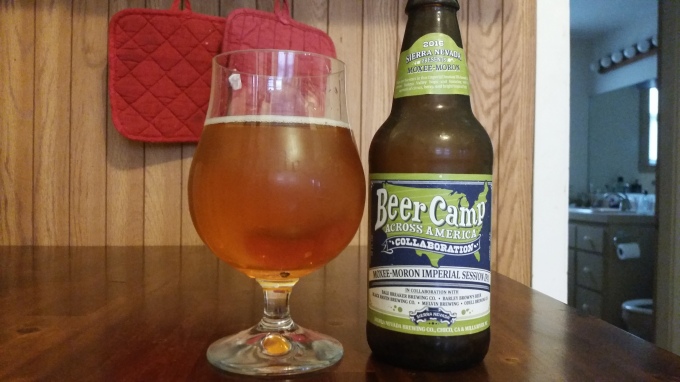 Moxee Moron Imperial Session IPA: Represents the Pacific Northwest and Rockies in collaboration with Bale Breaker, Barley Brown’s, Black Raven, Melvin and Odell Brewing. The “style” imperial session IPA is obviously a contradiction, or an oxymoron, and the town of Moxee is in the Yakima Valley hop-growing region, thus the name of the beer. This is a pretty straight forward West Coast style IPA, notes of pineapple, peach, mango and pine along with a solid bitter punch. This is balanced by a full malt backbone and packs a little punch at 7.5% ABV. Nothing wrong with this beer, but I would rather drink Sierra Nevada’s staple IPAs like Torpedo or Hop Hunter. Hoppy Boston score: 4.0/5. 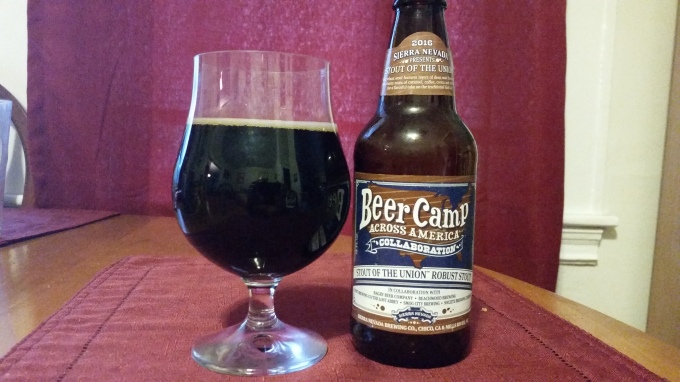 Stout of the Union Robust Stout: Represents the Southwest in collaboration with Bagby, Beachwood, Lost Abbey, Smog City and Societe. I’ve been advocating for more stouts and porters that feature full malt flavor without double digit booze or whiskey barrel aging and this fits the bill. Pitch black with huge malt flavor led by coffee, chocolate, caramel and toasted bread. The hops add enough bitterness to keep the malts in check and at 7.3% ABV it isn’t a light beer by any measure. If this beer was available regularly I think it would become a staple winter beer in my fridge. Hoppy Boston score: 4.25/5. 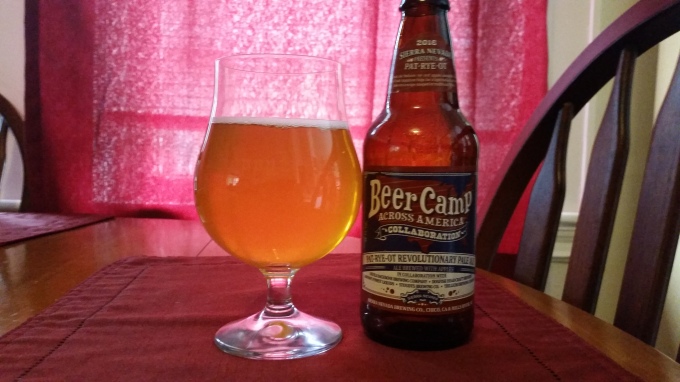 Pat-Rye-Ot Revolutionary Pale Ale: Represents the Northeast in collaboration with Devil’s Backbone, Dogfish Head, Lawson’s Finest Liquids, Stoudt’s and Trillium. A rye pale ale brewed with apples along with a big dose of hops. The hops come through first, notes of orange, passion fruit, tangerine and lemon. The subtle rye adds some spice and the crystal malts contribute some bready flavors and just a hint of sweetness. The beer is crisp and very drinkable, the flavors here are all in harmony.  Call me a homer if want, but this was my favorite beer of the bunch. Hoppy Boston score: 4.5/5.

Overall I really enjoyed this years Sierra Nevada Beer Camp pack, all of the beers were good to very good and there was some good diversity of flavors and ingredients. There has been a number of complaints about the price (which is over $30 in some places), and I completely understand but to me it’s worth it as an occasional splurge. I would like it if they went back to 1-1 collaborations next year though. One of the things I love about collaboration beers is tasting the styles of breweries I rarely get to try but with 6 breweries collaborating you don’t really learn much about individual brewers. Still, I would recommend giving this Beer Camp pack a shot if you see it around!