Hoppy Boston pale ale month continues with a review of Mo from Maine Beer Company. Mo is a great example of a beer that gets lost a little due to the success of other beers produced by the brewery. Popular IPAs Lunch and Another One typically fly off the shelves, and people sleep in their cars for an opportunity to buy rarely brewed DIPA Dinner. These beers have a lot going for them, they’re delicious hop bombs, they’re well-reviewed and hyped on social media, and they all contain the three magic letters for beer sales success (I-P-A). Mo is kind of a little brother to the IPAs, a little less booze, a little less bitterness, but still a delicious beer in it’s own right with the bright hop flavors and aromas that you expect from Maine Beer Company. One other advantage to Mo is that it’s usually much easier to find, it still sells quickly but it doesn’t disappear in a matter of hours like the IPAs. Maine Beer Company Mo is brewed with Falconer’s Flight and Simcoe hops, you can find it year round on draft and in 16.9 oz. bottles. 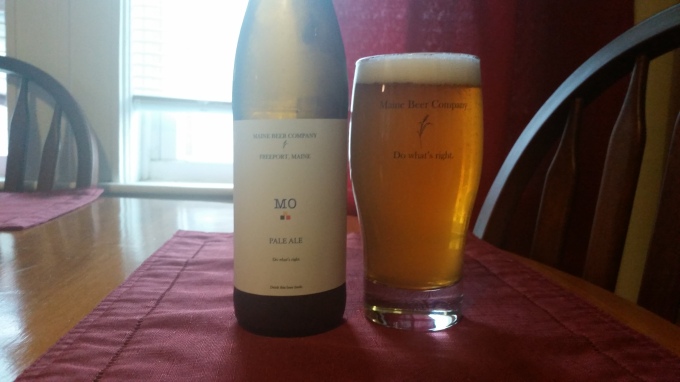 Maine Beer Co. Mo pours golden yellow with a solid white head. The scent is a big burst of new world hops dominated by tropical and citrus fruit aromas. The flavor is also very hop forward, notes of grapefruit, orange, mango and peach along with a crisp but mild bitterness. There is just enough malt to add some balance, touches of white bread and biscuits. Mo is very light and drinkable while being moderately boozy at 6.0%. The finish is dry and clean with just a hint of lingering hop flavor. Maine Beer Co. Mo is a great APA that routinely gets overlooked, I highly recommend seeking it out. Hoppy Boston score: 4.75/5.