Paste magazine has been running a series of articles where they have a panel of drinkers blind-taste test a number of beers in a particular style and then rate them. I love that the tastings are all blind, it eliminates any preconceptions about what “should be” good so the beers are rated by their flavor not by their label. It should come as no surprise that Maine Beer Company was well received in the tasting of 116 IPAs, with Lunch and Another One both placing in the top 5. Maine Beer Company has made it’s mark with hop-forward beers, and these IPAs tend to sell quickly. The big surprise (even to the judges) was in the ranking of 51 American stouts, where MBC’s Mean Old Tom placed #1 overall. Mean Old Tom doesn’t have the qualities that typically drive hype for stouts, it wasn’t aged in any type of liquor barrel and it’s ABV is in the single digits. I would personally love to see more gimmick-free, dry, milk and oatmeal stouts on the market, and this is one I have enjoyed in the past. Mean Old Tom is named after the founder’s uncle, it is an oatmeal stout aged on vanilla beans. The beer is available year round on draft and in 16.9 oz. bottles. 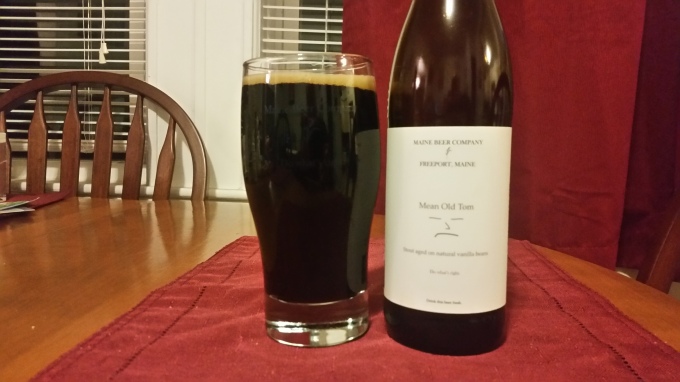 Maine Beer Co. Mean Old Tom pours pitch black with a mild tan head. The scent is a m mixture of roasted malt and a little vanilla. The flavor is very malt forward, as you would expect from a stout, notes of milk chocolate, toast, coffee, and toffee. The vanilla is noticeable but not too strong, providing a solid complement to the malt flavors. There are minimal hops, just enough to crisp up the finish a little. Mean Old Tom is full bodied and drinks very smooth at 6.5% ABV. The finish is clean with just a hint of lingering malt flavor. Too many brewers focus on bigger, bolder and boozier when they brew stouts, this beer is evidence that you can brew a great stout with full malt flavor but without a double-digit ABV. Hoppy Boston score: 4.5/5.