I first tried selections from Overshores Brewing Company last summer when I stopped in Connecticut on the tail end of a business trip to grab some local beers that weren’t distributed in Massachusetts yet. Recently Overshores has expanded distribution, so now their innovative versions of traditional Belgian beer styles can be found locally. As part of Hoppy Boston’s tripel month I decided to give Overshores Tripel Brun a shot. Tripel Brun is brewed with traditional Belgian base malts in combination with caramel and Munich malts that are not usually incorporated in this style. The result is a darker color and more complex malt profile compared to many conventional tripels. Overshores Tripel Brun is available year round on draft and in their signature 12.7 oz. cork-and-cage bottles. 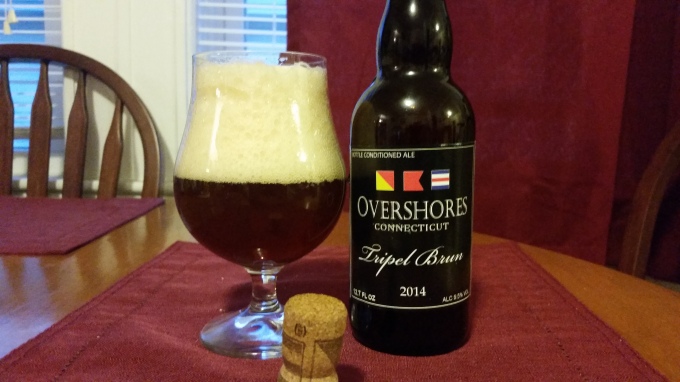 Overshores Tripel Brun pours a deep amber with a massive off-white head. The scent is mild, mostly fruity Belgian yeast. The yeast leads the flavor, notes of green apple, bubblegum and clove. The malts have the toasted, biscuit and candi sugar flavors you expect from a tripel along with some caramel from the medium-roasted malts used in this brew. There are minimal hops, the yeast and malts are the star here. The beer is medium bodied, but is a slow sipper by necessity at 9.5% ABV. The finish is full with some lingering malt sweetness and yeasty esters. This is an interesting take on the tripel style, the caramel malts add some complexity and help differentiate the beer from other versions. Hoppy Boston score: 4.0/5.