I just finished an awesome trip to Maine where I visited a number of breweries and tasted some delicious beer. I will get around to writing about some of these beers over the next few weeks. For now I still have a little backlog of articles to finish about my trip to Connecticut in mid-June. I might have gone a little overboard in my purchases, but Craft Beer Cellar in West Hartford had a great selection and I wanted to give a number of new-to-me breweries a shot. Next on the list is Overshores Brewing Company out of East Haven, CT. Overshores was the first brewery in Connecticut to focus exclusively on Belgian beer styles. Their brews mix traditional Belgian techniques and recipes with a diverse range of both old and new world ingredients. You can now find a selection of beers in either their East Haven tap room or in bottles distributed across the state. I grabbed two selections to bring home and sample. Simpel is a Belgian table beer brewed with Centennial and Cascade hops. Blanc de Blanche is a traditional Belgian witbier brewed with coriander and orange peel. Both are sold year round on draft and in distinctly squat 11.2 oz. bottles. 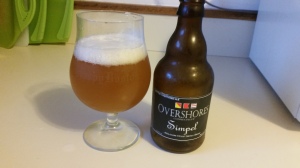 Overshores Simpel pours a deep yellow with a medium white head. The scent is mostly spicy and fruity Belgian style yeast along with a little citrusy hops. The yeast leads the flavor with notes of clove, coriander, pepper and pear. This is followed by the hops which add some mild lemon and grapefruit along with a refreshingly crisp bitterness. The flavor is rounded out by a light malt backbone. Simpel is super-light bodied and very easy to drink, and a true session beer at 4% ABV. Overshores Simpel is a very nice beer, tons of flavor and goes down smooth. If you want a low alcohol beer but you’re burned out on the glut of session IPAs on the market this is definitely worth a try. Hoppy Boston score: 4.25/5. 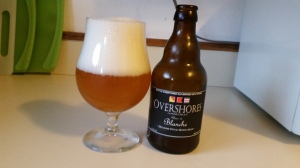 Overshores Blanc de Blanche pours a cloudy straw yellow with a massive white head. The scent is all Belgian yeast, spicy with some subtle fruitiness. The yeast comes through solidly in the flavor as well, notes of pepper, clove and green apple. This is complemented by soft touches of coriander and orange, very traditional additions to a Belgian witbier. The wheat leads the malt flavor, adding some balance and backbone. The beer finishes crisp and goes down easy, but the beer packs a little punch at 6.4% ABV. Overshores Blanc de Blanche is a well-made and very traditional take on the witbier style, perfect for the beach or a BBQ. Hoppy Boston score 4.0/5.