I mentioned yesterday that I visited two new breweries this weekend, the first was Castle Island in Norwood and the second was Trillium Brewing Company’s new location in Canton, a short drive away. Trillium’s line-up of well crafted and inventive ales has resulted in a zealous following, they could hold a bottle release at 2 AM during a blizzard and there would still be a line around the block at their Fort Point brewery. The new facility in the suburbs allows for increased production, a boon for fans of the brewery (aside from those few crazies who think beers only taste good if they are impossible to find). The new facility is also a fully functional brewery and retail store, they have a tasting room on one side (samples only for now) and the other side is for growler fills and bottle/merchandise sales. There are a few advantages to the drive to Canton, especially for those of us that live outside of Boston proper. The main one is parking, an absolute pain in the Seaport but plentiful at the Canton facility. When I arrived on a Saturday afternoon there was a short wait for growlers or bottles, the kind you would find at your local Chipotle during lunch (pre-norovirus and e coli outbreaks, maybe not the best example). I bought a number of beers including Launch Beer, an APA celebrating the opening of the new brewery. Launch Beer is brewed/dry-hopped with Mosaic and Citra hops, famous for the citrus and tropical fruit flavors and aromas that are so popular in New England’s newer hoppy beers. Trillium Launch Beer is available at the Canton location in 750 mL bottles and on draft for growler fills. 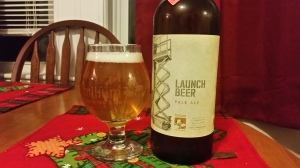 Trillium Launch Beer pours a clear golden yellow with a mild white head. The scent is a big burst of New World hops, tropical and citrus fruit. The beer is very hop forward, notes of mango, tangerine, lime and guava along with a very light bitterness. There is just enough malt for a little balance, touches of white bread and honey. The beer is crisp, clean and very easy to drink at 5.7% ABV. The finish is dry with just a little lingering hop flavor. Trillium Launch Beer is the perfect style to celebrate the opening of the new brewery, well crafted and featuring the big hop flavors that have made Trillium one of the most popular breweries in Massachusetts. Hoppy Boston score: 4.5/5.