My favorite beers list for the fall is somewhat briefer than normal, it’s actually the shortest list I’ve had since I started the blog. It’s not that I didn’t sample and review great beers over the last three months, on the contrary I think I found quite a few,  there were just a lot of beers that scored just below the threshold. I have also made an effort over the last few seasons to review some of my all time favorites along with beers that are new to me in order to flesh out the My Favorite Beers list, but I got off track on that pursuit and reviewed almost all new or new-to-me beers this fall. The fall is also a tough season for me, I am not a fan of pumpkin beers and it seems like the majority of the seasonal releases focus on the pumpkin craze. This winter I promise to mix in some personal favorites along with the new beers and add a number of stouts, porters, quads and other big winter beers to my favorites list. As always, the links below take you to the full review and all of these beers have been added to the My Favorite Beers page linked above. Cheers!

Tree House Julius: The flagship beer that is one of the major reasons for the explosion in popularity and demand for Tree House products. Juicy and fruity new world hops and a soft bitterness make for a delicious and easy to drink IPA. I hate waiting in line for beer, but it is worth it for some Julius.

Singlecut Billy Full-Stack: There was a lot of excitement when Singlecut announced that they would start distributing to the Boston area, and this beer is a major reason why. Tons of hop flavor in this bold DIPA, but it is still extremely easy to drink without a hint of alcohol on the tongue. One of the best DIPAs I’ve tried recently. 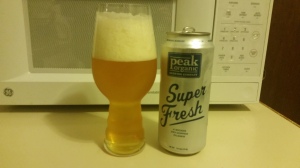