With the constantly increasing competition in the beer market, each individual brewery needs something to set it apart from all of the other options available to consumers. In my opinion the best way to achieve this is to do one thing extremely well, become known as the master of a particular style or set of styles. Many breweries have thrived starting with this model, but eventually every brewer wants to branch out and try their hand at the other styles of beer. This can be difficult from a marketing perspective, if your customers have equated your brand to hop-forward beers then they might be taken aback when you release a Berliner Weisse. Stillwater Artisanal Ales recently ran into this conundrum, they were well known for their line of delicious saisons but wanted to branch out to include more American styles in their portfolio. The solution was brilliantly simple, as demonstrated by the Stillwater modern works series of beers. The Stillwater name is still present but the artwork is distinctly different, at first glance it would look like a completely different brand of beer. One of the releases in this series is Yacht, a tribute to canned beer. Not long ago pretty much the only beer packaged in cans were macro-brewed light lagers, so Stillwater decided to brew their own interpretation of the light lager style (hint, unlike most macro lagers they added a bunch of hops to this interpretation). Stillwater Yacht is currently available on draft and in tallboy cans. 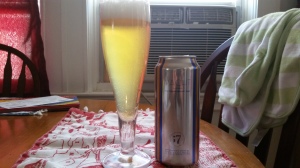 Stillwater Yacht pours a clear straw yellow with a moderate white head. The scent is a subtle mixture of floral and citrusy hops. The taste is hop-forward, notes of lemon, resin, grass and grapefruit along with a crisp bitterness. This isn’t like an IPA that clubs you over the head with hoppiness, but the flavor is vibrant and complex. The hoppiness is balanced by a light malt flavor, just a touch of crackers and grain. The beer is super light and easy to drink, at 4.2% ABV it is a session beer by any definition. Stillwater Yacht is a perfect summer beer, clean and refreshing but tons of flavor, perfect for the outdoors and the warm weather. I am not sure if this was a one-off or a new regular release, but I hope it’s the latter as this is amongst the best lagers I’ve ever tried. Hoppy Boston score 4.75/5.