A couple weeks ago I picked up a number of beers from Connecticut breweries that aren’t distributed in Massachusetts yet, with the hope of getting better acquainted with the CT brewing scene. My reviews of these beers continues with a couple of selections from Half Full Brewery in Stamford, CT. I wasn’t very familiar with the Half Full lineup, which is part of the reason I wanted to give some of their beers a shot. Half Full Brewery was founded by “Chief Beer Philosopher” Conor who decided to leave a soulless Wall Street job to travel the world, and during his travels found inspiration for his new brewery. Half Full was founded on the power of a positive attitude and the belief that things would work out. After four years of planning, training and brewing tons of beer the brewery opened and their story continues to evolve each day. I selected two of their beers, the spring seasonal Onward APA, and the flagship Pursuit IPA, both of which are distributed in 12 oz. cans. 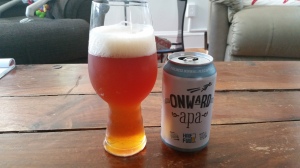 Half Full Onward APA pours an amber orange with a substantial off-white head. The scent is a mixture of earthy hops and bready malts. The taste is actually pretty light considering the appearance and aroma, the beer didn’t look or smell like most APAs, but the first taste had a flavor profile more in line with the style. There is solid hop character, touches of grass, pine and lemon along with a light and crisp bitterness. This is complemented by significant malt character. notes of caramel, biscuits and whole grain bread. The beer is medium bodied with moderate booze at 5.5% ABV. Overall Onward APA is a solid beer, although to me it is more of an English style pale ale than an APA, but that is a minor quibble. Hoppy Boston score: 3.75/5. 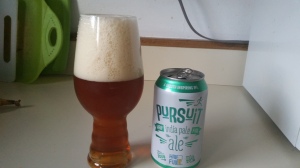 Half Full Pursuit IPA pours a deep amber with a monstrous off-white head. The scent is relatively mild, some floral and grassy hops. The hops hit much harder on the palate, noticeable flavors of pine, grapefruit, orange and grass along with solid but not overwhelming bitterness. There is also substantial malt character for balance, notes of toffee, freshly baked bread and honey. The beer is medium bodied and packs a little punch at 7% ABV. This is a good IPA if you like more balance and drinkability in the style as opposed to the tongue numbing West Coast style hop bombs. Hoppy Boston score: 4.0/5.