A couple weeks ago I was participating in a casual Twitter conversation about local beer with some other enthusiasts and someone mentioned drinking a few of Bog Iron Brewing’s selections at a Boston area bar (The Independent in Somerville). I replied that I was excited to see their beer in metro Boston, I’ve been impressed with what I’ve sampled but don’t find myself in Norton very often. I was later chided by the Bog Iron Twitter account (which I believe is run by Brian, one of the co-founder/brewers) that Norton isn’t THAT far from the city. He was right of course. From my apartment in Watertown I can make the door-to-door trek in about 45 minutes on a Saturday, not a bad ride to pick up some high quality beers. Having been put in my place, I made the pilgrimage to Norton last weekend, tasted some of their wares and left with a few growlers. I guess the lesson here is that it pays to call your local beer blogger out for being lazy :). The growler I was more excited to crack into (and did as soon as I got home) was Middle Child Double IPA. Bog Iron currently brews a progression of IPAs, Stinger weighs in at 7.4% ABV, while boozy Stung is 10.5%, and Middle Child falls in between (thus the name) at 9.5%. Middle Child was sold out for growler fills on a previous visit so I was very excited that the keg hadn’t kicked when I arrived. 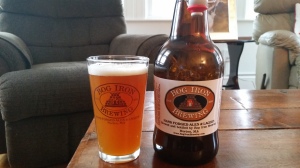 Bog Iron Middle Child pours a deep orange, slightly cloudy, with a solid off-white head. The scent is a huge burst of hops with the predominant citrus and tropical fruit aromas that you expect from many new world hop varieties. The hops also lead the flavor, notes of guava, grapefruit, lemon, mango and a little pine. This is accompanied by a hit of bitterness, enough to know you’re drinking an IPA but not so much that it numbs the tongue. The hops are balanced by a solid malt backbone, touches of grainy bread and toffee that help fill out the flavor. The beer is medium bodied and goes down very easy for 9.5% ABV. The finish is clean with some fruity hops and crisp bitterness. I have enjoyed a number of the selections at Bog Iron but I am pretty sure that Middle Child is my favorite, everything you want in a double IPA and worth the (not far) drive to Norton on its own. Hoppy Boston score: 4.75/5.