Foolproof Brewing Company in Pawtucket, RI was originally founded as High Jinx Brewing, but changed their name to prevent a potential trademark dispute. Foolproof was founded on the principle of experience based brewing where each beer was brewed to be perfect for a particular drinking experience. For example, their flagship “Backyahd” IPA was brewed as an ideal BBQ beer. Foolproof distributes their beer to RI, MA and now CT. Their year-round beers are sold on draft and in 12 oz cans, while their special releases are sold in 22 oz bottles. One of Foolproof Brewing’s popular brews is Raincloud, a Robust Porter designed for enjoyment on a rainy day. Brewed with dark malts and a blend of European hops, Raincloud is a beer to drink when the weather keeps you inside. 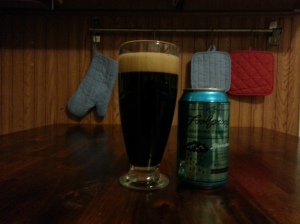 Foolproof Raincloud Robust Porter pours coal black with a large and well sustained tan head. There is very nice lacing on the glass as you drink. The smell is pretty neutral, some dark malts and coffee come through. The dark malts dominate the taste, strong flavors of dark chocolate and coffee with a little molasses. There is a nice hop bitterness balancing out the malt flavor, providing a solid equilibrium between the malt and the hops. Foolproof Raincloud Robust Porter has a full mouthfeel, but goes down pretty easy for a dark beer. At 6.5% ABV it is moderately alcoholic without putting you under the table like some bigger stouts and porters. The aftertaste is a mixture of mocha flavor with a little hop bitterness on the tongue. This is a very well done and drinkable porter that makes me want to check out more of Foolproof’s offerings. Hoppy Boston score: 4.5/5.