D.L. Geary Brewing Company of Portland, ME was the first microbrewery in New England. When Geary Brewing was incorporated in 1983 there were only 13 microbreweries total in the United States. Co-founder David Geary traveled to England and Scotland to train in breweries and learn more about brewing traditional British style ales. Geary’s sold their first pints of Geary’s Pale Ale in 1986. D.L. Geary Brewing now makes a series of year-round and seasonal ales that are distributed all over the Eastern United States. One of Geary’s flagship beers is London Porter, a traditional British style dark ale. London Porter mixes dark chocolate, black and crystal malts with Cascade, Goldings and Williamette hops. While many newer breweries make their dark beers with very high levels of alcohol, London Porter is only 4.2% ABV. Many might even consider it to be a session beer. 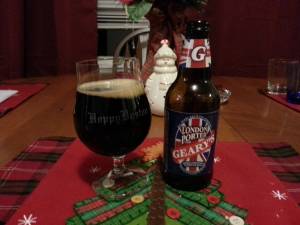 Geary’s London Porter pours a clear dark brown with a mild tan head. The smell is dominated by dark malts, milk chocolate and brown sugar. There is a touch of mild earthy hops in the aroma as well. The taste is malt forward but balanced. The malts give flavors of mocha, molasses, toffee, dark chocolate, roasted barley and a touch of plum. The hops add a pleasant bitterness along with some hints of pine and earthy flavors. Geary’s London Porter has a medium body, full carbonation, and finishes pleasantly bitter, like strong black coffee. At 4.2% ABV this is a pretty low alcohol beer so it is very easy to drink. Geary’s London Porter is a great choice for a balanced, flavorful dark beer that will hold up to rich winter food without the high alcohol content. Hoppy Boston score 4.5/5.