It seems like many craft breweries are focused on bigger and bolder beers. Imperial stouts, barleywines and barrel aged strong ales can top out at over 12% ABV. Beers that would have been double IPAs just a few years ago are plain IPAs now. This makes it difficult for some beer lovers to enjoy more than a beer or two in a sitting, especially those of us who are starting to get old and don’t have quite the tolerance we used to. This has led some brewers to embrace session beers. Session beers are well crafted, full on flavor but low in ABV. The definition of a session beer varies a little depending on who you ask. Beer Advocate says it is any beer at or below 5.0% ABV, while others set the maximum alcohol content as low as 4.0% by volume. Notch Brewing company of Ipswich, MA only makes session beers and all of their brews weigh in at 4.5% ABV or below. Even with the lower alcohol content Notch is able to make a wide range of flavorful lagers and ales, great to bring to BBQs, the beach or tailgating. Notch beers are available on draft, in bottles, and now in cans. One of their flagship beers is Notch Saison, a light and flavorful Belgian style farmhouse ale. 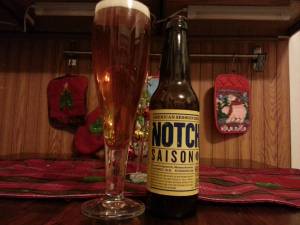 Notch Saison pours a clear gold with solid carbonation and a full and sustained white head. The smell is dominated by the Belgian yeast, with notes of clove and must, followed by some subtle maltiness. The taste is also yeast-forward with tastes of spice, funk and green apple. The malt contributes some baked bread and grain flavors. The hops are subtle but present, adding a touch of pine and earthiness. All of the flavors are in balance, present but none dominate the flavor. The beer goes down smoothly and finishes slightly dry with a mild lingering crispness. At 3.8% ABV the beer is very light, but still full on flavor. Notch Saison is a great beer to have if you’d like to drink a few without getting drunk, the ideal of a session beer. It’s a perfect beer for a night like New Year’s Eve. You’ll have a much better chance making it to midnight drinking session beer! Hoppy Boston score: 4.0/5.