Last month my brother and I brewed a batch of beer at Hopster’s Brew and Boards, the new brew-on-premises and bar in Newton Corner (for my earlier write-up see: http://wp.me/p3TEvn-3M). We brewed a Belgian style IPA, which I have finally been able to taste, so I thought I would share the recipe and review the beer. Before we get into the review, a few things have changed at Hopster’s since my last visit. First, they finally got a liquor license, and built a bar. The selection is great, all New England craft beers. The selection rotates pretty frequently, but on our bottling day they had Pretty Things, Jack’s Abby, Idle Hands, Mystic, Wormtown, Atlantic Brewing Co., Maine Brewing Co., Notch, Slumbrew, Allagash and some others I’m forgetting. Basically a who’s-who of local craft beer. The open bar has led to a larger crowd at Hopster’s, so the kitchen is now open daily, serving locally sourced cheese, charcuterie, and flat breads. We had a plowman’s board and everything was well made and delicious. So, if you want to check Hopster’s out and have a beer before you commit to brewing a batch of your own, they are ready and open for business. So, onto the recipe: Hoppy Boston/Hopster’s Belgian IPA: 7.5 Gallon batch (One kettle) 12 lbs. Pilsen light liquid malt extract 1 lb. CaraPils 1 lb. Aromatic malt 1 lb. Vienna malt 0.5 lbs. Crystal 15L 2 lbs. Belgian light candi sugar 1 oz. Nugget hops (pellet)-60 min 1.5 oz. Amarillo hops (leaf)-30 min 2.0 oz. Chinook hops (leaf)-20 min 3.0 oz. Simcoe hops (leaf)-10 min Dry hop with Citra hops Yeast: Wyeast Belgian Abbey 2 The idea with this beer was to make a Belgian tripel that is hopped like an American IPA, with a target of ~7% ABV. The light specialty malts add character and body. The copious late addition of American hops supply the citrus hop flavors that should complement the fruity esters from the Belgian yeast. 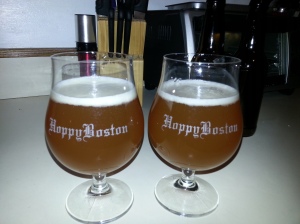 Hoppy Boston/Hopster’s Belgian IPA pours a slightly cloudy amber with a small white head. The first smell is all American hops, like a burst of fresh citrus in your nose. This is followed by the Belgian yeast, providing notes of bubblegum and light fruity esters. The first taste is very hop-forward, grapefruit, lemon, tangerine and pine. The yeast forms a nice complement, adding green apple, bubblegum and a touch of must. There is some light malt flavors in the backbone, but the beer is all about the hops and yeast. The bitterness is present but not overbearing, and you get a nice tart aftertaste. The beer goes down very easy, the alcohol isn’t really present in the flavor. This Belgian IPA is a good beer for all seasons, it is full flavored enough to keep you warm in the winter, but light enough in body to sip on a warm summer day. I highly recommend heading down to Hopster’s and brewing your own batch!