Atlantic Brewing Company started in 1990 as Acadia Brewing, a single-barrel brewery attached to a brewpub in Bar Harbor, Maine. After a mumber of expansions and a name change, Atlantic Brewing has established themselves as a mainstay of the Maine craft beer scene. They now brew beer on a 10 acre estate down the road from picturesque Acadia National Park. In the summer you can visit the brewery and eat at the attached restaurant, Mainely Meat BBQ. They also bottle their beers and distribute them throughout the state of Maine and much of the Northeast (including in the Boston area). Atlantic brews a lineup of year-round and seasonal ales, along with some specialty beers and sodas. Their ales tend to focus on traditional Bristish varieties, although one of their most popular beers is an ale brewed with Maine blueberries. One of Altantic Brewing’s flagship beers is Coal Porter. Coal Porter is an English style Porter brewed with a series of dark malts, including chocolate, crystal, Munich and black patent malt. These malts are balanced by Goldings and Pilgrim hops. 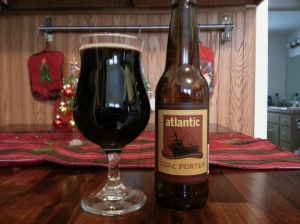 Atlantic Brewing Coal Porter pours a dark brown with a mild tan head. The smell is dominated by dark malt aromas; dark chocolate, brown sugar, a little coffee. These malts dominate the flavor too, strong bittersweet chocolate flavors followed by cappuccino with touches of caramel and toasted bread. The hops provide some bitterness with a little earthy flavor that keeps the beer from being overly sweet. The beer is medium bodied and finishes clean, with a mild mocha aftertaste. At 5.6% ABV Atlantic Brewing Coal Porter is not overly strong, and it’s very easy to drink for a darker beer. Overall this is a solid offering, it would pair well with hearty beef stew or braised short-ribs. A good beer for a winter night when you can’t drink one of the high-alcohol imperial stouts or barleywines that many breweries are releasing. Hoppy Boston score 4.0/5.