Belgian style ales have become a staple of the American craft beer scene, due to their diverse boutique of malt and hop profiles and flavorful strains of yeast. This wasn’t always the case. German and British influenced beer styles gained a major foothold in the US long before their Belgian counterparts. One of the breweries who is most responsible for bringing Belgian ales to American palates is Allagash Brewing Company, based in Portland, ME. Founder Rod Tod brewed his first batches of Allagash as a one-man operation in 1995, since then the brewery has grown into a nationally recognized power on the craft beer scene. Allagash makes a series of year-round Belgian styles, including their ubiquitous White Ale, along with specialty beers and one-off experimental brews. They continue to lead innovation in American interpretations of Belgian styles, including barrel aging in pre-used whiskey and wine barrels, and the use of wild bacteria strains to make sour beers. One of Allagash’s flagship beers is Allagash Black, a Belgian style dark ale brewed with a strong selection of dark malts and Allagash’s proprietary strain of yeast. 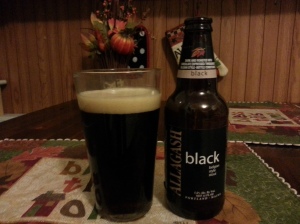 Allagash Black pours a very dark brown, nearly black, mildly carbonated with a solid and sustained tan head. The smell starts with the Belgian yeast, mild but present, with hints of apple and raisin. You also get some dark malt aromas on the nose, touches of coffee and roasted barley. The beer is malt forward, the roasted malts come through along with strong chocolate, coffee and brown sugar flavors. The yeast adds a nice complement with fruity esters that give some plum notes along with some must. Earthy hops add some balance and bitterness, but take a back seat to the malt and yeast. Allagash Black is medium bodied, lightly carbonated and drinkable. It weighs in at 7.5% ABV, solid enough to provide some warmth without giving the beer a strong alcoholic flavor. Allagash Black is a great dark beer for the cold nights of late fall and winter. It is no wonder that Allagash has emerged as a mainstay in the New England craft beer scene. Hoppy Boston Score: 4.5/5.