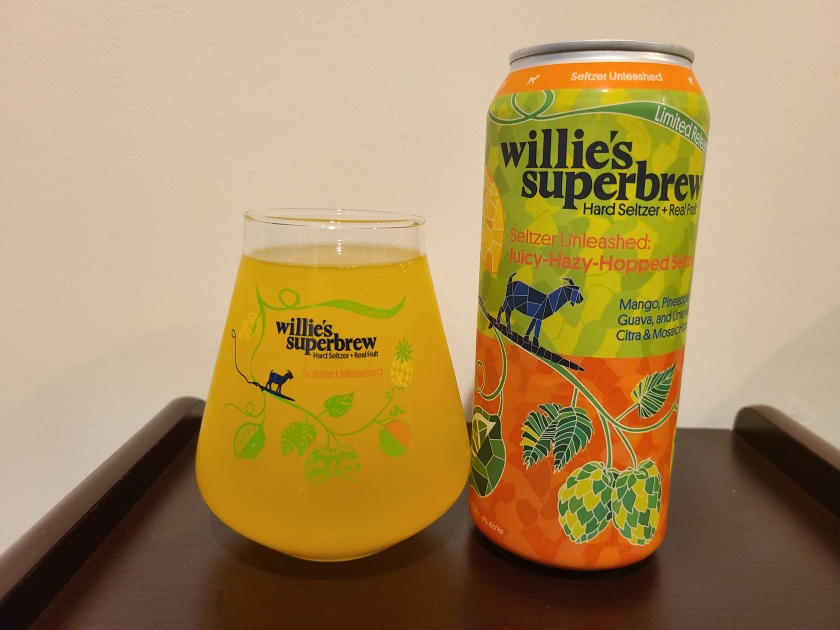 Hard seltzer has become a major segment of the alcohol market, with rapid growth every year. It is no surprise that breweries all over the country, from the biggest brewers in the world to small local establishments, are jumping into seltzer. I haven’t tried much of it, I am not a huge fan of non-alcoholic seltzer to be honest, but it seems like most of them are basically just different flavors of carbonated water with some added booze. In fairness, I’ve heard from people who enjoy hard seltzer that there can be vast differences in the quality between brands. One local hard seltzer company is trying to do something slightly different. Willie’s Superbrew out of Pawtucket, RI adds a significant dose of real fruit to each of their hard seltzers, giving more flavor than a typical seltzer. They also make a series of limited release Seltzer Unleashed, dry-hopped seltzers loaded with fruit juice that are intended to mimic NEIPAs. The kind people at Willie’s Superbrew were nice enough to send me a sample of the latest Seltzer Unleashed, this one brewed with mango, pineapple, guava and lime fruit and then hopped with Citra and Mosaic hops. Each version of Seltzer Unleashed is available for a limited time on draft and in 16 oz cans.

Willie’s Superbrew Seltzer Unleashed pours hazy light orange, it looks a lot like a NEIPA without any head. The aroma is very fruity, lots of tropical fruit, not sure how much is from the hops and how much is from the fruit juice. There is a ton of fruit flavor, the pineapple and mango come through strong. You don’t really taste the hops over the fruit, Citra and Mosaic both have really distinct characteristics and it doesn’t really come through. Seltzer Unleasehed is crisp and easy-drinking, a bit on the sweet side but not cloying, and at 6% ABV it packs some punch while still being lighter than most NEIPAs. I understand what Willie’s Superbrew is trying to do here, but it tastes more like carbonated fruit juice than a NEIPA. Some might argue that NEIPAs taste like carbonated fruit juice anyways, I disagree (outside of some poorly done examples). That’s not to say that this is bad, I enjoyed it more than most seltzers. My wife thought it would be a great beer alternative on a summer afternoon, and I am inclined to agree.