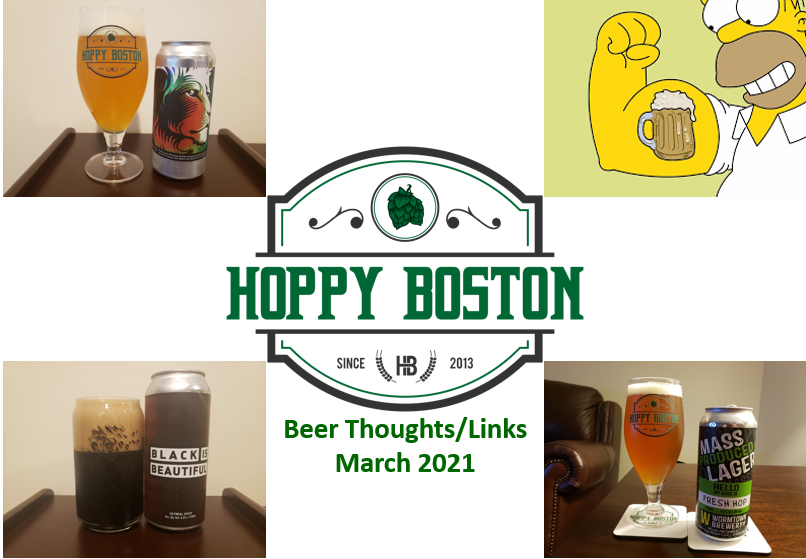 Another crazy month is COVID-land, and while there appears to be a light at the end of the tunnel, I imagine I am not the only one who is completely burned out. My time on beer social media has declined a bit, but I still managed to put together a thoughts/links article for March. As always, feel free to send along any articles you find and feel should be included.

WBUR has an article on the diverse strategies that craft brewers took to survive a tough winter. I’ve been pleasantly surprised by how few local breweries have called it quits considering the year we’ve had, and I am hoping that enough has been done to keep that number from exploding over the next few years.

Massachusetts breweries fought for years to pass franchise reform, basically the ability for a brewery to break their contract with a distributor for cause (which was essentially impossible before), and the brewers guild celebrated the passing of a bill that finally made these changes for small and medium sized breweries. To the surprise of nobody, that bill is immediately facing a legal challenge. Jack’s Abby has decided to leave Atlantic Importing Company, and they are getting sued in the first real test of the new bill. I am not a lawyer, but it seems like Jack’s Abby has a pretty good case here and I hope they come out on top.

Good Beer Hunting did some follow-up on the Black Is Beautiful initiative, where breweries from around the country brewed dark beers under the Black Is Beautiful label with the promise that proceeds would go to local charities that support equality and police reform. Unfortunately, many breweries were unwilling to share details about their donations, raising serious questions about how many just kept the profits. While I know there will inevitably be bad actors in any of these charity drives (Sierra Nevada had similar issues with their campfire fundraiser a few years ago), I imagine that many great organizations also received significant contributions, and I don’t think a few liars should cause all of the great and charitable breweries in the country to abandon these efforts.

A beer-cider hybrid called Graf(f) is gaining popularity in the craft beer world. Paul Crowther from Pellicle has an article on the style, and it’s origins in the popular Dark Tower series of fantasy novels from Stephen King. I am a huge fan of the Dark Tower books and epic fantasy in general, I’ve often thought about writing a completely non-beer related rundown of my favorite fantasy series (not sure if anyone who reads Hoppy Boston would really care), and the Dark Tower books would definitely be a top-5 series for me.

One of the most interesting articles I read this month was about the Simpsons, and how the depiction of beer, booze, drinkers and drunks influenced the author (and a generation of future beer drinkers). I was a huge Simpsons fan growing up, but I had never really considered how the show influenced my thoughts on alcohol (aside from not wanting to be Barney…or Homer). Good food for though anyways.

Boston Magazine has updated their list of the “best” breweries in the Boston area. These lists are always pretty arbitrary and incomplete, but this rundown catches many of the great options available in greater Boston.

After almost a year of COVID related shutdown, popular Worcester restaurant and beer bar Armsby Abbey is re-opening in April. Once I feel comfortable going back to restaurants I defiantly need to make a trip back to Worcester.

Time and Materials Beer has launched, brewing their beer out of a garage in Reading. I recently tried their collaboration with Amory’s Tomb and Lost Shoe, I will do a full write up on the strong Belgian golden ale soon, but I will tease that review by telling you that the beer is excellent.

I know the “holiday” was a couple of weeks ago, but the Mass Brew Bros have a run down of the St. Patrick’s Day beers being produced by local breweries.

Wormtown Brewing is celebrating 11 years in style, with the official opening of their new Worcester taproom. The pictures look awesome, I can’t wait to stop by sometime soon.

Rhode Island breweries are fighting for the ability to sell more beer directly to consumers from their breweries. Currently the limits of one case of beer per customer is much lower than many other states in the region, and is especially tough during COVID-related shut downs or limits on taprooms.

Dr. J. Nikol Jackson-Beckham has a profile of White Lion Brewing, the first brewery in Springfield and one of the few Black-owned breweries in Massachusetts.

Appellation Beer looks back at Next Beer, an app that launched in 2015 to be the “Pandora of beer” and had some cool science behind it, but failed for a variety of reasons.

Beer Writing opportunity: The Portland Press Herald is looking for a craft beer columnist, a great position for a Maine based beer writer.

That is it for March, thanks again for following and reading Hoppy Boston and for liking/sharing/commenting on social media posts, it has been a nice piece of normalcy in 12+ months that have been anything but. Bring on the warmer weather, and a continued crawl towards a post-pandemic world!