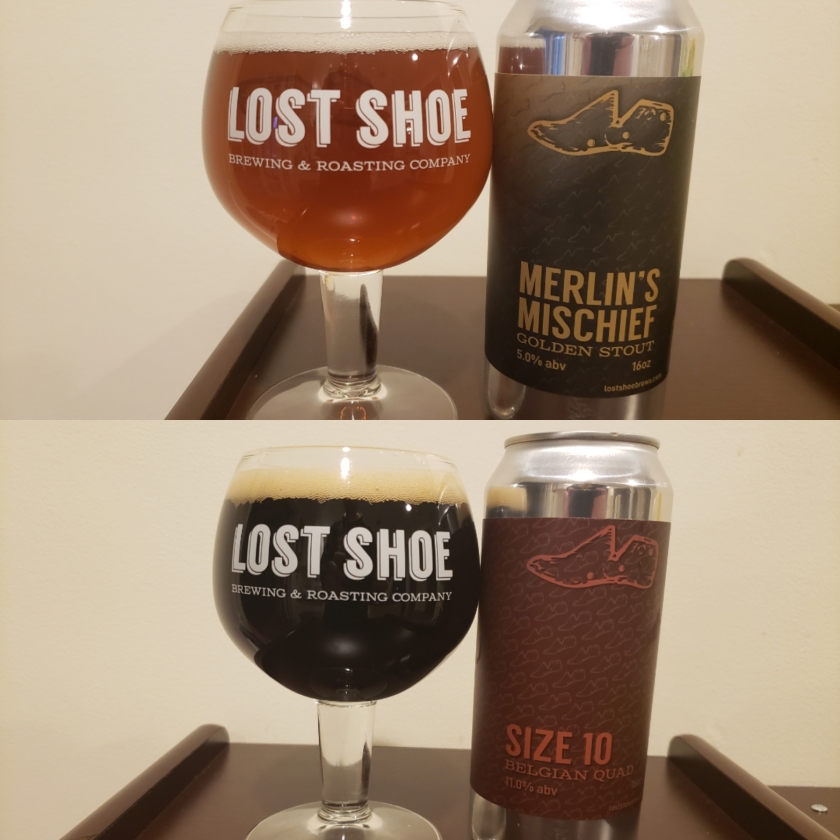 Last week I wrote about my first visit to Lost Shoe Brewing and Roasting Company in Marlborough (spoiler alert, it is pretty awesome), and I thought I would follow up with formal reviews of a couple of their beers. I bought everything they had available to-go in cans, the big advantage of selling all of your beers in singles, and I’ve had a chance to try quite a few already. I also bought the awesome chalice pictured here, which has immediately become one of my favorite brewery glasses, I will make more visits to Lost Shoe just to have an excuse to break it out. Two of the beers I grabbed to-go were Merlin’s Mischief, a golden stout brewed with coffee, cocoa and vanilla, and size 10, a traditional Belgian style quadruple. Both beers are available on a rotating basis on draft and in 16 oz cans.

Lost Shoe Merlin’s Mischief pours golden orange with a small off-white head. The aroma is a mixture of coffee, vanilla, and roasted malt. The adjuncts lead the flavor, the coffee and vanilla are well represented and you also get a hint of cocoa. This provides a nice complement to the malt flavor, hints of bread dough and coffee. A hint of late hops rounds out the flavor with some earthy notes and some balancing bitterness. Merlin’s Mischief is medium-bodied and smooth, a session beer by some definitions at 5.0% ABV. The finish is rich with some lingering coffee and malt flavor. This is an interesting beer, I usually miss the roasted malt flavor in some golden stouts, but the coffee and cocoa adjuncts help replace it here. I actually think a bigger version of this beer could be exceptional, but I enjoyed Merlin’s Mischief as-is too. Hoppy Boston score: 4.25/5.

Lost Shoe Size 10 pours deep brown with a solid tan head. The aroma is mostly the expressive Belgian yeast, fruity and a little spicy. The flavors imparted by the yeast also lead, notes of bubblegum, peppercorn, and cardamom. A rich malt body adds hints of molasses, fig, and currant, plus a touch of warming booziness. There is minimal hop flavor, just a little late hops for some balance. Size 10 is a full-bodied sipper, but goes down pretty easy for a beer with 11% ABV. The finish is rich with some lingering yeast and malt flavors. This is a great quadruple, layers of flavor and very smooth. there aren’t enough stellar quads available locally, I will definitely seek this one out again. Hoppy Boston score: 4.75/5.