When a brewery (or any business for that matter) undergoes an ownership change it can cause a mixture of excitement and trepidation for regular customers. In the case of a brewery the causes for concern come in the form of worry that the new owners will stop making classic styles or that quality will decline. There is also excitement about the potential to revitalize the brand, add new beers to the lineup and address issues that can get overlooked by long-time business owners. The new ownership group at Smuttynose has only been running the business for a matter of months, but it appears that they are doing a solid job balancing continued production of classic styles like Finest Kind IPA and Old Brown Dog with some exciting new beers and new artwork. Two of the beers that were recently released are Whole Lotta Lupulin DIPA and Mysterious Haze NEIPA, the types of hop-forward IPAs that drive buzz and sales in the industry right now. They launched the beers with a social media campaign and a series of events around their distribution footprint, the kinds of things that help spread the word about new beers. They also sent samples to a number of beer writers (myself included), and I am happy to pass along my thoughts. Smuttynose Whole Lotta Lupulin and Mysterious Haze and available now on draft and in 16 oz cans.

Smuttynose Whole Lotta Lupulin pours hazy deep orange with a solid off-white head. The aroma is solidly hoppy, lots of citrus and tropical fruit. The flavor is also very hop forward, notes of melon, tangerine, grapefruit and berry along with a mild bitterness. This is complemented by a solid malt backbone, touches of crackers and biscuits along with a hint of residual/boozy sweetness. Whole Lotta Lupulin is medium bodied and drinks very smooth for a beer with 8.6% ABV. The finish is crisp with lots of hops and a little warming alcohol in the finish. This is a nice DIPA, plenty of hops with some good big-beer character. Hoppy Boston score: 4.25/5. 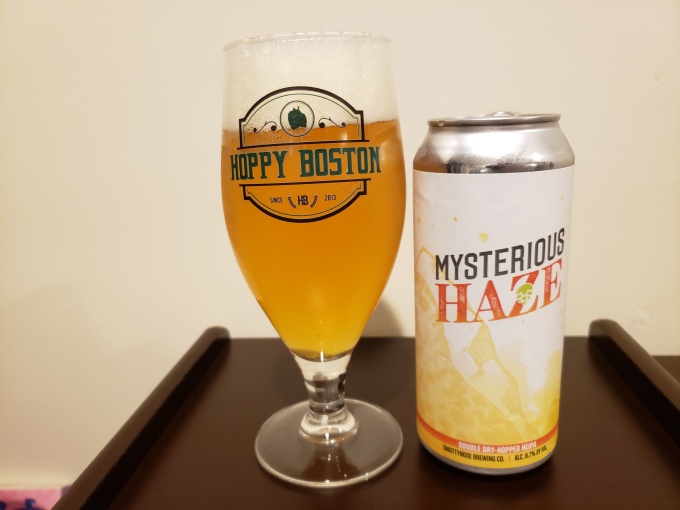 Smuttynose Mysterious Haze pours slightly hazy copper with a massive white head. Plenty of hops on the nose, led by strong citrus aromas. The flavor is also hop-forward, hints of orange, grapefruit and lemon zest along with minimal bitterness, this is definitely a NEIPA. The hops are balanced by some noticeable malt character, hints of bread crust and cereal. Mysterious Haze is very easy drinking and at 6.7% ABV it’s a solid beer but not overdone. The finish is crisp with some lingering hop flavor on the tongue. Overall Mysterious Haze is a well crafted NEIPA, approachable for drinkers unfamiliar with the style but packing enough hop punch to satisfy the long time hop heads. Hoppy Boston score: 4.25/5.