Earlier this week I reviewed a couple of New England style IPA’s from Hill Farmstead, widely considered one of the best breweries in the world. Hill Farmstead makes some amazing hoppy beers and are rightly credited with helping develop the trendy NEIPA substyle featuring fruity hops, a soft mouthfeel and low bitterness. The thing that sets Hill Farmstead apart is the wide range of styles that they brew at an exceptional level. In fact, the brewery is probably best known for their Farmstead ales, a series of saisons with diverse flavor profiles led by expressive yeast strains. Each Farmstead beer is part of the Ancestral Series, named after one of founder Shaun Hill’s ancestors. My friends who visited the brewery a few weeks ago brought me back one bottle of each Ancestral series beer they had available, and I am working my way through. The first two I’ve opened are Arthur, a traditional farmstead ale, and Dorothy, a farmstead ale dry hopped with varieties from the US and New Zealand. Both beers are available on a rotating basis in 750 mL bombers. Make sure to follow Hoppy Boston on Instagram to see my opinions on the rest of the beers from the series (I’m not planning on doing any more blog posts about these).

Hill Farmstead Arthur pours clear light orange with a massive white head. The aroma features some fruity yeast along with some acidity. The fermentation leads the flavor, notes of barnyard funk, peppercorn, green apple and tart lemon. This is complemented by a mild malt backbone, touches of crackers and bread crust, and some floral and grassy hops. Arthur is super light and easy to drink, with a moderate 6% ABV. The finish is dry with some lingering yeast flavors and a mild tart bite. The is a nice wild saison, complex but still easy drinking and approachable. Hoppy Boston score: 4.25/5. 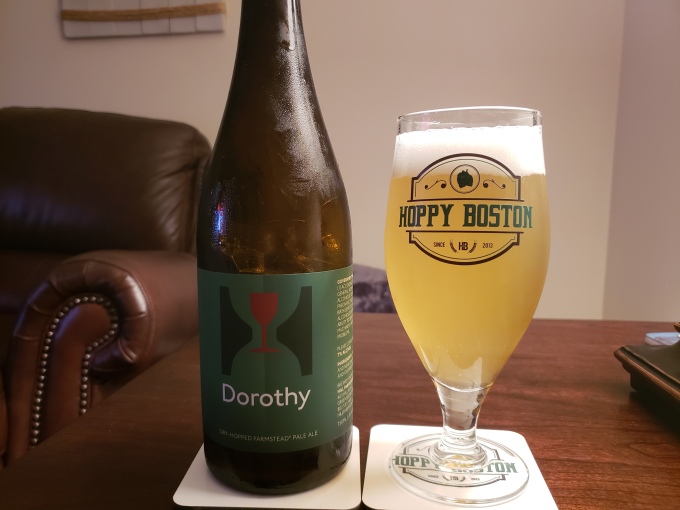 Hill Farmstead Dorothy pours a clear light yellow with a massive white head. The aroma features some floral and fruity hops along with expressive Belgian style yeast. Dorthy has a nice balance of flavors, the beer is complex but everything works together. The hops add notes of lemon, cut grass and herbs. The yeast adds hints of peppercorn, clove, apple and a little funkiness. Some light malt rounds out the flavor with touches of cracker and biscuit. Dorothy is super light and easy drinking but packs a bit of punch at 7% ABV. The finish is clean and dry with some mild lingering hop and yeast flavors. This is a stellar saison, a diverse set of flavors that all come together in a delicious beer. Hoppy Boston score: 4.75/5.