There are a number of breweries that I feel like I need to visit on a more regular basis, but for one reason or another don’t make it too. A great example is Medusa Brewing in Hudson. Medusa is a 20 minute ride from my house, has a beautiful bar and taproom, and they make exceptional beers. Unfortunately most of my brewery visits right now are quick pop-ins to grab beers to go, family commitments keep me from hanging out and having a few pints. Until recently all beers-to-go from Medusa were in growlers, and I hate growlers and try to avoid using them when I can, so that probably limited my visits. Now Medusa is canning a rotating selection of their beers for sale at the taproom, and I imagine my trips to Hudson will become much more frequent. On a recent stop I grabbed two releases, Prosperous IPA and Citra Legacy Rye IPA. Both beers are available on a rotating basis on draft and in 16 oz tallboy cans.

Medusa Prosperous pours clear bright orange with a solid white head. The aroma is a solid burst of fruity hops. These hops also lead the flavor, notes of orange, pine and mango along with a full bitter bite, this is very much a West Coast style IPA. The hops are balanced by a solid malt backbone, touches of crackers and whole grain bread. Prosperous is medium bodied, drinks easy and has moderate alcohol at 6.6% ABV. The finish is crisp and clean with lingering hop flavor and bitterness. This is a really well crafted West Coast IPA, it’s nice to mix some of these bitter classics in with all of the juicy NEIPAs being produced in the area, and this is a great example. Hoppy Boston score: 4.5/5. 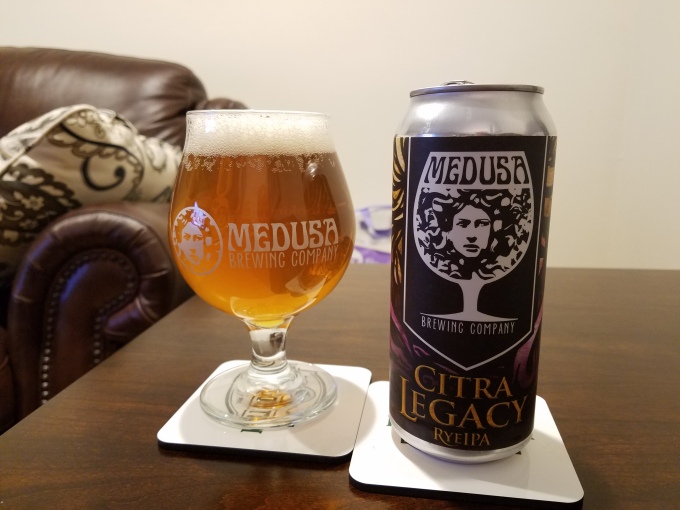 Medusa Citra Legacy pours slightly hazy light orange with a substantial white head. The aroma is a big burst of lusciously fruity hops. The flavor is very hop forward, notes of passion fruit, tangerine and mango but minimal bitterness, this beer is more in the New England IPA style. The malts add a solid hit of spicy rye along with a backbone of bread crust and cereal. Citra Legacy is smooth and easy to drink, not too boozy at 6.3% ABV. The finish is crisp with some lingering hops and rye. This beer is stellar, I wouldn’t have expected the fruity hops to work so well with the rye flavor, but it really comes together perfectly. A must try if you like rye IPAs. Hoppy Boston score: 4.75/5.