The buzz around cloudy, juicy New England style IPAs keeps growing, and while many beer snobs (and quite a few brewers) continue to dismiss the style as a fad there is no denying that a huge market has developed for this sub-style. Follow a bunch of local beer geeks on Instagram or Untappd and it will look like a majority of beers they consume are hazy and heavily dry-hopped. I knew that the NEIPA buzz had reached another level when a buddy of mine who drinks far more Coors Light than anything else was raving about TreeHouse Green. The popularity of the style has attracted the attention of breweries that you wouldn’t associate with hazy and hoppy beers. Shipyard, a brewery known for traditional British Ales brewed with the distinctive Ringwood yeast strain, now has a new NEIPA that is getting positive reviews. Even Sam Adams, a brewery that resisted the IPA revolution for many years, has announced that they are producing a hazy, juicy IPA starting in 2018. It is no surprise that so many breweries are throwing their hats into this ring, but the question remains, will these bigger breweries have success with this style?

The New England IPA craze has been fueled almost entirely by small breweries with limited or no distribution. If you look at the breweries that popularized the style, The Alchemist, Trillium, Treehouse, Bissell Brothers and Other Half are good examples, they sell the vast majority of beer on-site and very soon after it’s packaged. This limited distribution has driven demand, follow any of those breweries on social media and you’ll get a deluge of stories about wait times, long lines and per-person purchase limits. If people are willing to jump through these hoops for this beer style, doesn’t it stand to reason that a larger brewer without the same production and distribution constraints could sell a massive amount of NEIPA?

There are a number of advantages bigger breweries have as they begin to produce New England IPAs. The biggest advantage is the economy of scale, bigger breweries should be able to make the beers on scale and then sell them at a lower price point, which is huge when many small batch NEIPAs are routinely over $20/4 pack. These breweries also have the distribution apparatus in place to get the beers right onto the shelves soon after they are packaged. An advantage that is easy to forget is the big hop contracts large breweries sign, they should have no issues buying large lots of sought after hop varieties (this is an under-rated issue for small breweries who can’t scale their homebrew recipes due to a lack of specific hops). I think we’ll see large increases in acreage planted with Mosaic, Citra and Galaxy hops. These larger breweries typically employ talented brewers who should be able to develop recipes that are competitive with some of the better beers on the market. I assume these beers can scale, I’m not a professional brewer but I would be interested to hear if anyone with more experience in the field thinks this will be an issue.

There are also a few big disadvantages that larger breweries face when they try to compete in the NEIPA space. The biggest one is making sure their consumers buy and drink fresh beer. These beers have notoriously short shelf lives, and just because they reach the shelves fresh doesn’t mean they are still at peak flavor and aroma when they are purchased and consumed. I’ve already seen a number of NEIPAs from mid-sized breweries that have clearly been sitting on the shelves well past their peak. This is a huge advantage to small breweries, who sell the majority of beer onsite within days of packaging, so customers are always purchasing it at peak freshness. The other issue is buzz. There is a well established psychological phenomenon where people enjoy a food/beverage more when they think it’s rare, expensive or highly regarded. One of my big goals with this blog was to find readily available beers that are just as good as the whalez people wait in line for. While I think it’s been a success, the user ratings on crowd-sourced beer sites are still heavily skewed towards rare beers from a select subset of breweries. While bigger breweries can fight back on value there is no chance they will attract the same buzz as releases by TreeHouse or Bissell Brothers. The freshness and buzz issues can go hand in hand too. I read two reviews of a new NEIPA from a regional brewery, one reviewer loved the beer and the other completely trashed it. It might be a difference in personal preference, but I wonder if the writer who trashed the beer was drinking a batch that was past it’s prime. 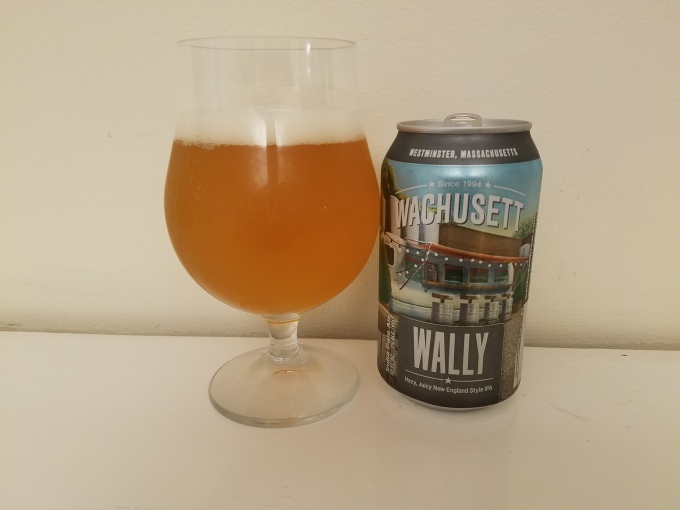 So, back to the big question, can larger brewers be successful making NEIPA? I’m tempted to just say we’ll see, but what fun is that? I think a few will find success, the beers won’t be the envy of beer traders or cause people to stand in lines, but they will sell well and turn a good profit. I think Wachusett Wally is already a success story and the delicious NEIPAs from Springdale are ramping up production with an eye on distribution. I also think many will fail, and some will fail miserably. Some of the beers will be lower quality, or the breweries will do a poor job keeping fresh beer on the shelves and consumers will be ignored these brews in favor of other options. I also think the glut of these beers on the market will be a problem, Sam Adams isn’t going to convert Trillium drinkers, they are going to compete for marketshare with other mid-sized and large breweries making large batches for distribution. The competition is a good thing for consumers in theory, but it will probably mean more old and mediocre beer sitting on store shelves. It will be interesting to see how long the NEIPA phenomenon lasts, I think some of the popular breweries will still make the style for a long time, but the trend chasers will move away from it quickly. Regardless, I love my hazy, fruity, low bitterness IPAs, and I am really interested to see more breweries tackle the style! If you get overwhelmed by the number of options keep tabs on Hoppy Boston and I’ll try to review as many as I can. Cheers!