When you mention fall seasonals there are usually two styles that come to the forefront, pumpkin beers and marzen/oktoberfests. I am normally not a huge fan of pumpkin beers, although I did a blind tasting hosted by the Mass Brew Brothers last weekend and actually found more than a few that I enjoyed. On the other hand I’ve always enjoyed the marzen style, Sam Adams Octoberfest was one of the beers that facilitated my conversion to craft beer and I’ve never lost a taste for the style. I’m glad that American brewers have mostly stuck to the style guidelines with Oktoberfests, I’m actually a little shocked that some brewers haven’t tried to brew a version of  the style loaded with hops and still try and pass it off as a marzen. One Oktoberfest that I’ve heard good things about but hadn’t sampled myself is Ok2berfest by Two Roads Brewing Company. They release this traditional take on the German lager in the late summer every year, it is available on draft and in 16 oz. tallboy cans, perfect for filling up a drinking stein. 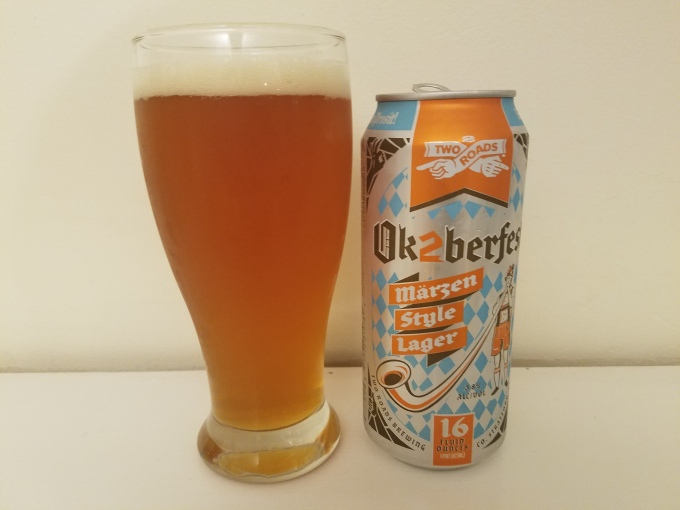 Two Roads Ok2berfest pours deep orange with a small white head. The aroma is rich with toasted malts. The flavor has the full malt flavor that fits the style, notes of caramel, toasted bread and honey along with just a hint of sweetness. This is balanced by a little late hop flavor, herbal and earthy. Ok2berfest is medium bodied and drinks smooth, not too boozy at 5.8% ABV. The finish is clean with some lingering malt flavor. This is a really nice Oktoberfest, a perfect beer for the cooler fall temperatures. Prost! Hoppy Boston score: 4.5/5.